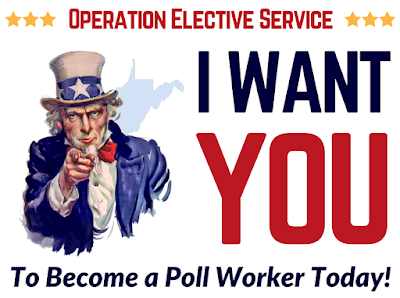 The life of a democratic republic hangs in the balance. No, I'm not speaking of Ukraine. I'm speaking about American democracy. Our democracy rests on a foundation of free and fair elections. Those are becoming more difficult to run. Even before the 2020 election, a majority of Americans didn't trust elections. The 2020 election only made things worse. The loser refused to concede. 147 members of Congress voted to overturn the election results. A mob of insurrectionists invaded the US Capitol to force the matter. Election "workers became the target of vote-rigging conspiracy theories that put them in physical danger and threatened their livelihoods." Nineteen states enacted new voting regulations in 2021, increasing the red tape not just for voters but for election workers as well in an effort to eliminate suspected voter fraud. Some want laws that would enact jail time and/or big fines for election workers who make innocent mistakes.

That brings us to today's report from a precinct polling place in a neighborhood in Richardson, Texas. This account is from a voter who asked to remain anonymous. Who can blame her?

Two women were setting up. Told us at 7:00 that the clerk had not shown up yet. After 20 minutes or so, they let my husband and I come in to vote. The machine to print the ballot didn't work. Eventually my husband told them it was not printing because the machine was plugged in for power but wasn't attached to the kiosk machine they use for signature, etc. He didn't touch anything, just told them. They fixed it.

We vote and have our ballot. I am the first one done. I walk over to the machine where you insert your ballot. I can't insert it because the machine is running and printing a report. Quite lengthy. It runs out of paper. The poll worker doesn't know how to change the paper. My husband and another gentleman tried to help without touching the machine. She finally got in touch with tech support. Who were not helping much!

I ask the other poll worker if they can insert our ballots and what we should do. She says she doesn't know. Ask the other lady. Didn't ask because she is on with tech support.

The other gentleman leaves with his ballot. My husband and I start leaving as well as others. The lady who I asked the question says no you can't leave with your ballot. She is upset the gentleman left with his ballot. He only left with it because he wasn't instructed and he had already been there 90 minutes.

We left the ballots there. Don't know if they can insert them. After 90 minutes, we didn't get to vote.

I don't blame the poll workers. They are undertrained and overworked. I don't blame the county elections department. They are underfunded and entangled with new equipment and red tape each legislative session. I partly blame the politicians who spread the Big Lie about voter fraud. And I partly blame the public who fails to appreciate the democracy we have in this country and take it out on election workers. Maybe their hearts are in the right place, but their accusations are undermining the very democracy we should be cherishing.

When you vote today, thank the poll worker who hands you your coveted "I Voted" sticker. If not for him or her, American democracy isn't possible. And next election, consider volunteering to be a poll worker yourself. Not a poll watcher. A poll worker. Without them, there would be no sticiers.