Divining the Votes on Rezoning Applications 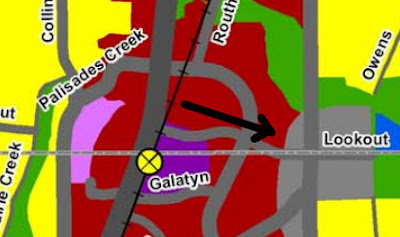 There's another rezoning application before the Richardson City Council. This one is for 16 acres of undeveloped land at Glenville and Lookout. The developer wants to build apartments, an independent living facility, townhomes, and live-work units. The 2009 Land Use Plans designates the property for "Regional Employment." The City staff report states that, despite that 2009 plan, an 8.5 acre tract on the northern half of the property has rights that allow for apartment development equating to approximately 153 units. The property owner is now coming back for another bite of the apple, asking for rezoning for the other 8 acres from industrial to residential to allow for a total of up to 590 residential units. That's almost four times as many apartments as current zoning would permit and, of course, infinity times more than the zero called for in the 2009 Land Use Plan. Will that 2009 Land Use Plan or the current zoning pose an insurmountable barrier for this City Council? That remains to be seen, but my money is on "No." By which, of course, I mean the answer to the developer's request will be "Yes."

The property has deed restrictions "requiring City Council approval to allow a zoning application that included multi-family residential entitlements." Approval to submit an application was granted in October of 2021. Approval of the rezoning itself now seems to be a foregone conclusion. My own cursory look at this case doesn't cause me to question that result, if (when) it happens. But I do have cause to wonder about a prior similar application that was recently rejected.

The new plot of land in question is undeveloped. It's surrounded by office buildings. To the east is an (empty?) office building (sign in front advertising "260,000 sq ft. Campus & 16 Acres"). To the south is the former Verizon campus (current occupancy unknown). To the west is the huge Blue Cross/Blue Shield office building. And to the north is the gem of Richardson parks, the Spring Creek Nature Area. With all that existing office space, and with demand for office space down and demand for housing remaining strong, building housing in the area seems like a no-brainer.

I certainly don't question the decision of the property owner to want to switch his target market from office space to residential. I might question the plans for an independent senior living component there. With all that office space nearby, wouldn't employee housing be a more appropriate use? I might also question the price point of the planned housing. Barry Hand, speaking in favor of the application, said that trends showed an increasing demand for a variety of housing types, housing sizes, and levels of affordability. But in answer to a specific question regarding pricing, Ben Bruenig said, "It would be marketed at the highest rental pricing for Richardson." In exchange for granting a zoning change, I might try to extract from the landowner more commitment to meet the recognized demand for more levels of affordability of housing in Richardson. But asking developers for concessions that help the City address a need for a better mix of housing in exchange for rezoning that helps the developer's bottom line is not the Richardson Way.

Last year, there was another rezoning application for an undeveloped piece of land. That one was adjacent to UT-Dallas and an upcoming Silver Line DART station. That land, too, is zoned for employment but the owner sees an unmet demand for housing. That, too, seemed to me to be a no-brainer. There is no market for more office buildings in the area. There is, unquestionably, an unmet demand for housing. That demand will only grow when the DART station is built. But the Richardson City Council rejected that application, for stated reasons that were at best, dubious.

"It's not consistent with the land use [plan]." — Bob Dubey.

"There's been a lot of talk about the real estate market for commercial and office space. I think that this pandemic has caused a lot of consternation and confusion. Pandemics run their course. Things will go back to normal sometime. And I'm hesitant to make a decision on this to put this kind of property on this particular plot of land based on a shortage of housing right now." — Janet DePuy.

I suspect there are other motivations at play here than appropriate land use for a specific property. I suspect who the property owner is, or how big his neighbors are, just might play a bigger role in whether an application gets approved or not. I suspect whether there's a bigger, more influential neighbor who might have his own sights set on the property might play the biggest role of all in these decisions. But because being transparent about picking winners and losers in the land development game could get a City in legal trouble, the real reasons behind the votes have to be divined. (By the way, that earlier vote was 4-3. Justice, Corcoran, and Arefin were outvoted. I expect their votes on this new case to be consistent with their reasoning earlier.)

The City Council approved the application unanimously, 7-0, despite rejecting a similar project only months ago. Arguments used against that project are not operative for this project. Developers probably know why, they know how the game is played, but I, as a member of the public, don't see a lot of transparency in the rules.