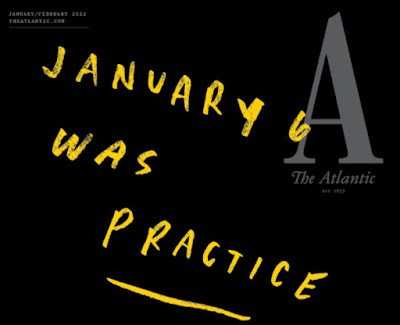 Happy New Year, America. I hope you survive. You see, I've been growing more and more concerned with the fragile state of our American democracy. I no longer take solace in the fact that America has faced crises before and somehow survived, perhaps because of our fundamental values, perhaps because of dumb luck. "Past performance is not indicative of future results" is the usual legal boilerplate language used in ads for financial investments. It's time we apply it to American democracy as well, which is being attacked in plain sight.

A large minority of the American body politic is actively cheering on the attack. Another large minority is more worried about climate change, social and economic inequality, or a lingering pandemic. I agree that all these are serious threats, but I've come to believe that we face a clear and present danger to American democracy itself. Because I believe that a strong democracy is our best hope of dealing with all the other threats we also face, I rank the current threat to our democracy above all others in need of immediate attention. Unfortunately, many Americans are simply asleep at the wheel, expecting their own lives to go on pretty much as before no matter how the attack now underway plays out.

"The Atlantic" magazine has been around since 1857, that is, since before the Civil War. It's seen a lot. In the "Editor's Note" of the January-February 2022 edition of "The Atlantic", Jeffrey Goldberg states the situation plainly. "A Party, and Nation, in Crisis: The GOP’s leaders are attempting to destroy the foundations of American democracy."

Stating plainly that one of America’s two major parties, the party putatively devoted to advancing the ideas and ideals of conservatism, has now fallen into autocratic disrepute is unnerving for a magazine committed to being, in the words of our founding manifesto, “of no party or clique.” Criticism of the Republican Party does not suggest an axiomatic endorsement of the Democratic Party, its leaders and policies. Substantive, even caustic, critiques can of course be made up and down the Democratic line. But avoiding partisan entanglement does not mean that we must turn away from the obvious. The leaders of the Republican Party—the soul-blighted Donald Trump and the satraps and lackeys who abet his nefarious behavior—are attempting to destroy the foundations of American democracy. This must be stated clearly, and repeatedly.
Source: The Atlantic.

So my 2022 wish is for us is to wake up, recognize the threat we face, and, in the words of Abraham Lincoln, dedicate ourselves to the great task of ensuring that our nation "shall have a new birth of freedom, and that government of the people, by the people, for the people, shall not perish from the earth." The stakes in 2022 are that high.