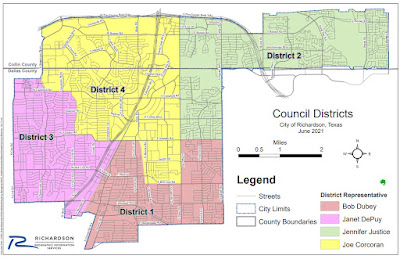 Redistricting, or drawing new political boundaries, is something that happens every ten years after the Census is completed. The City of Richardson has to complete this exercise for City Council districts, but because of our at-large election system, the stakes are low. Creating districts that stretch and snake this way and that in order to predetermine the outcomes of elections is not an issue here. The City Council voted last Monday to appoint members of the City Plan Commission to a district boundary commission. The City Council missed an opportunity for opening an avenue for public engagement and input.

The City Council's "2021-2023 Statement of Goals" includes this strategy: "Promote avenues for public engagement and input." City staff then offered this tactic in support: "Evaluate opportunities to promote service of boards and commissions and to broaden the diversity of applicants."

The district boundary commission is a perfect opportunity to do something in support of this strategy and tactic. It's a short term assignment. It doesn't require experience. The knowledge required can be imparted in an orientation session. City staff will assist with mapping and census information. The City Council could pick names from the phone book and get results as good as the CPC will likely come up with. The Council has final say in approvimg any map the commission submits, so there's no risk of the City ending up with something crazy, unless the City Council itself wants crazy.

In other words, this is a perfect opportunity for increasing public engagement. Ask for volunteers. Pick people who are *not* on existing boards and commissions in order to broaden the involvement of citizens in City government. But instead of engaging the public, the City Council turns it over to the CPC. I'm sure the CPC will do an adequate job, but the City Council missed an easy opportunity for increasing public engagement. It's low-hanging fruit. It's like the City Council doesn't even read their own strategies and tactics. I can't tell because no one said anything when this came before the City Council. There was no deliberation before they voted 7-0. The entire process took one minute and 48 seconds. Things decided behind the curtain and then ratified in open session with no deliberation is not the hallmark of a transparent government. The unanimity and the silence carry a message, loud and clear, that every council member is happy with this opaque process. I had higher hopes for the new City Council elected last May. It's all more than a little depressing.

To read about how controversial this exercise got the last time ("My phone is blowing up"), read "Slicing and Dicing Richardson" from 2012.

Thx Mark, My thoughts exactly. The districts should community's of interest.?? What does Mark Twain have to do with Canyon Creek .