TIL: MLK on Economic Justice 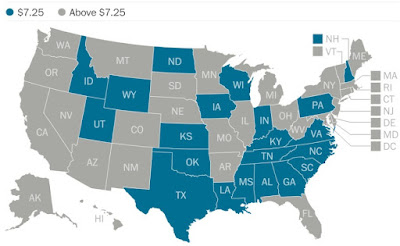 Today, our country honors Martin Luther King, Jr. Normally the focus is on his movement for voting rights. It's tragic that today, more than half of a century after his death, the voting rights secured in MLK's day are under threat in America. In 2021 alone, "19 states have enacted 33 laws that will make it harder for Americans to vote." But voting rights are not what I want to focus on today. Instead, I want to turn to a speech by MLK that ties voting rights to economic justice. In it, MLK makes an observation that explains a feature of that map above showing the minimum wage laws by state. The connection MLK drew between economic justice and segregation is what I learned today.

Notice how, in that map, the states in the old Confederacy almost uniformly have the lowest minimum wage laws in the country. The exceptions are Florida and Arkansas. This map was published in 2018, soon after Arkansas's voters approved a raise in that state's minimum wage law over the objection of the state's Republican governor, Asa Hutchinson. The law would bring Arkansas's minimum wage up to $11/hour. Notably, $11/hour is the starting pay of Walmart, which is headquartered in Arkansas. Gov. Hutchinson considers even Walmart's starting pay to be too high for everyone in Arkansas.

MLK gives an explanation of how that map came about. In a speech he gave, titled "Our God is Marching On!", in Montgomery, Alabama, after the famous march from Selma in 1965, he teaches us:

Our whole campaign in Alabama has been centered around the right to vote. In focusing the attention of the nation and the world today on the flagrant denial of the right to vote, we are exposing the very origin, the root cause, of racial segregation in the Southland. Racial segregation as a way of life did not come about as a natural result of hatred between the races immediately after the Civil War. There were no laws segregating the races then. And as the noted historian, C. Vann Woodward, in his book, The Strange Career of Jim Crow, clearly points out, the segregation of the races was really a political stratagem employed by the emerging Bourbon interests in the South to keep the southern masses divided and southern labor the cheapest in the land. You see, it was a simple thing to keep the poor white masses working for near-starvation wages in the years that followed the Civil War. Why, if the poor white plantation or mill worker became dissatisfied with his low wages, the plantation or mill owner would merely threaten to fire him and hire former Negro slaves and pay him even less. Thus, the southern wage level was kept almost unbearably low.
Source: MLK Research and Education Institute.

We are still living with that Reconstruction era political strategem today. Whether it's minimum wage laws, or so-called "right-to-work" laws, or social safety net benefits, the story is always the same. Opposition to laws benefiting the poor and working class is anchored in the old Confederacy, where, as Martin Luther King, Jr., explained in 1965, the message of the "southern aristocracy" to the "poor white man" was that "no matter how bad off he was, at least he was a white man, better than the black man."

That is how I am remembering Martin Luther King, Jr., today.