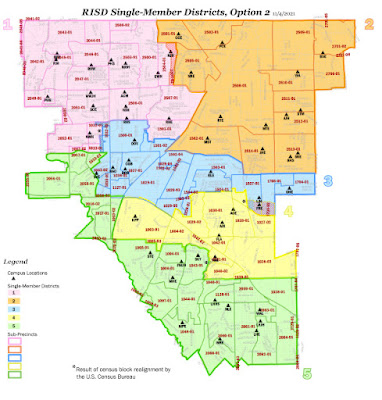 The Richardson ISD is performing its first-ever redistricting exercise, having just adopted single member districts in 2019. Monday night, at the meeting of the RISD Board of Trustees, the three maps that the district is considering were shown to the public for feedback.

Upon first looking at the three maps, I found all of them acceptable but preferred Option 1. That was because its main change was to shift a neighborhood from District 2 to District 3. Because District 2 is the largest and District 3 is the smallest, this map seemed to be the simplest and most direct way to address the imbalance.

But Trustees Megan Timme and Eron Linn both pointed out a downside to that map. It would divide the Springridge Elementary attendance boundary between the two districts. Although I don't consider this a fatal flaw, it's better if it isn't divided. A quick look at the current map suggests this situation is common along many of the district boundaries. Before the board uses this reason as a deciding factor, they should ask staff to do an analysis of exactly how often this occurs in the current map and in each of the three map options.

What about Option 2? It looks like Forestridge Elementary attendance boundary is already divided. Option 2 leaves it divided, just in a different way. So, it's better than Option 1 on this criterion, but not better than the current map. One advantage Option 2 has is that it best supports the desire for District 3 and 4 to be "opportunity" districts for minority candidates. The Hispanic citizen voting age population in District 3 peaks at 24% in Option 2. The Black citizen voting age population in District 4 peaks at 58% in Options 2 and 3. The differences in the three options are tiny, but in a close race, this could be decisive. Based on the whole reason we set up a single-member district system in the first place, I'm now inclined to favor Option 2.

What about Option 3? Option 3 makes the most number of border adjustments. The ones on the west side of the district appear to be reacting to Census tract changes, avoiding dividing Census tracts. I'm not sure how important that is, but if the residents affected care about that, this could be an advantage for Option 3. I do find it odd that the district created a map with Census tract boundaries in mind, but didn't create a map with elementary school attendance zones in mind. The biggest advantage of Option 3 in my mind is that the maximum population differential between districts is the smallest in Option 3. It's 8.8%, compared to 9.86% in Option 2 and 9.97% in Option 2. Because the forcing function for redistricting is population differential, and because Option 3 addresses this most effectively, I'm now inclined to favor Option 3. It preserves Census tracts and it narrows the population differential the most.

Rereading the above analysis, I see I'm now inclined to favor two different options, 2 and 3. Oops. Interestingly, the option I don't favor is Option 1, my original choice. So, flip a coin. I can live with either Option 2 or 3 and based on trustee comments at the meeting, I don't think Option 1 has a chance, so I expect I'll be content with the December vote, no matter which option wins.

Only two members of the public spoke, although there were an unspecified number of comments received through the RISD website. One public speaker mildly complained that he couldn't find on the RISD website the slides presented at the board meeting. I don't know when they were uploaded to the website, but they are there now.

The other speaker was more interested in school attendance zone boundaries than election district boundaries but saw elections as the way to get equity issues addressed through changing school attendance boundaries. I'm with her on that, but I don't see that any imaginable redistricting maps with a 5-2 system would increase the diversity of the board, which is already more diverse than any in RISD's history and more supportive of Diversity, Equity, and Inclusion than any in RISD's history. I see equity as being under threat with the trend of recent board elections, but don't see redistricting as providing a solution. Now if we could open up redistricting to more imaginative solutions, say a 7-0 single-member district system, we could then try to create a third opportunity district for minority representation. Yeah, I could get excited about that.