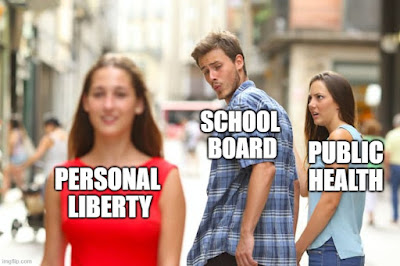 There's a gaping divide in politics today, and nowhere is it on show more than in schools across the country. Richardson ISD is no exception, where the school board president abruptly resigned, in part no doubt because of public invective hurled at her and in part perhaps because of a split on the school board on how to deal with a pandemic.

On one side are the parents, community members, and trustees who value public health measures like wearing face masks, social distancing, and vaccination.

On the other side are those who think that personal liberty trumps all, that parents should be in charge of how schools manage public health crises.

It puts the RISD superintendent on the horns of a dilemma. No matter what she does, she will be accused either of not valuing public health or not valuing personal liberty.

Personally, I think it's a false dilemma.

Patrick Henry famously declared, "Give me liberty or give me death." Decisive. Inspiring. Heroic even. But Patrick Henry owned 67 slaves, so the "me" in his quote carries more weight than the "liberty." His quote had as much self-interest as patriotism behind it. It's even less relevant today than it was in 1775. Today we're not talking about denying liberty as much as imposing a little personal inconvenience (face masks, social distancing, vaccination) in exchange for public health (avoiding potential hospitalization and death from an infectious disease that has contributed to 700,000 deaths in America already). "Give me liberty but give others death" is a much less inspiring rallying cry than Patrick Henry's.

That's how I see it. But I realize that many others with the opposite viewpoint are dug in and aren't about to change their minds. The superintendent is in a no-win situation. By bending to public pressure from the anti-maskers, she loses support from the public health advocates without regaining support from the personal convenience advocates, who by now just want her gone. The school board does not have her back. A faction may even be maneuvering to remove her. If she leaves or is pushed out, RISD will be the loser. The school board will bear the blame.

School board members are elected. We get what we vote for. There's an election every May. Next year, I'll be voting for trustees who value public health over personal convenience. For trustees who have the backs of administrators who protect public health. They say politics is a blood sport, and nowhere is that more true than right now in RISD. How public officials behave this year will matter more to my vote than what candidates say next year. Richardson voters, pay attention.