You Can Water on the Twelfth of Never

1916. That's even. That means I can water on even-numbered days, right? That's what the city's announcements said. But not more than once every three days. Huh? Is the combination of those two rules the same thing as once every four days? What's that, you say? Ignore all that? New rules? Now, because of my even address, I can water only on Tuesdays and Saturdays? That's straight from the city, you say? Who am I supposed to believe? The city or the city?

For the record, water conservation is important, despite the impression given by how the city may be bungling its rollout of Stage 2 water restrictions. The latest word on restrictions, which I believe the city will stick with, is that odd addresses can water on Wednesdays and Sundays. Even addresses can water on Tuesdays and Saturdays. No watering is allowed between the hours of 10 a.m. and 6 p.m.

If confusion still leads you to get one of those $150 citations, be sure to tell your lawyer about the city's mixed messages during the rollout of these new restrictions. It might help. 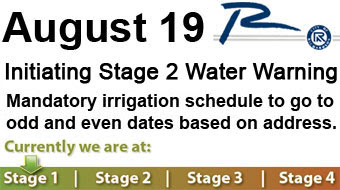