"There are three kinds of lies: lies, damned lies, and statistics."


" 'Lies, damned lies, and statistics' is a phrase describing the persuasive power of numbers, particularly the use of statistics to bolster weak arguments, and the tendency of people to disparage statistics that do not support their positions. It is also sometimes colloquially used to doubt statistics used to prove an opponent's point. The term was popularised in the United States by Mark Twain (among others)."
-- Wikipedia

Never was that phrase more apt than in first days after Texas Gov. Rick Perry announced his run for the 2012 GOP nomination for President. Perry made his record of job creation in Texas a centerpiece of his campaign. Critics, including a Nobel Prize-winning economist, quickly pointed out weaknesses in Perry's claim (see here and here). My topic today isn't so much who is correct, as how this topic has provided the perfect illustration of the old saying about "lies, damned lies, and statistics."

After the jump, two charts.


The first chart was published by the Miami Herald and supports Perry's claim. Perry has presided over "the best of times" in Texas.

The second chart was published by ThinkProgress and pretty much demolishes Perry's claim. Perry has presided over "the worst of times." 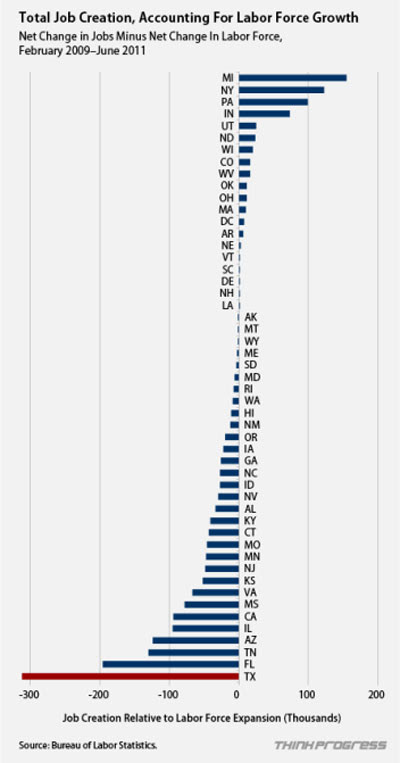 Well, then, which one tells the whole story? Neither. Taken together, they tell more of the story than either one does by itself. But look at either one in isolation and they illustrate the old saying about there being three kinds of lies: "lies, damned lies, and statistics." It's rare when you get such a perfect example as this.


P.S. It's good to keep this lesson in mind when you read about the City of Richardson's budget. No single article (even mine!) can possibly tell the whole story. There's always more to the story. Always. More on that anon. (Use a word three times and it's yours.)