The DMN Has Gone to the Dogs

If you're a reader of online news in Dallas, you're certainly aware that The Dallas Morning News erected a paywall in March, meaning that much of the newspaper's content is available only to paid subscribers. Here's what Publisher Jim Moroney said subscribers could expect:


"As your 'window on the world,' The Dallas Morning News takes seriously its mission to provide you not only with practical day-to-day news and analysis to prepare you for the day ahead, but also in-depth coverage of the larger stories that shape your world. We have invested heavily in our newsroom to ensure you get not only the most extensive original coverage of what is happening locally, but also commentary and insight into those regional, state, national and international events that impact your life right here in North Texas.
...
The journalism you’ve come to value in your print edition is now available in a new, easier-to-use format at dallasnews.com, as well as through new applications for your tablet and smartphone. While these digital versions will be updated several times a day, we’ll also be bringing you breaking stories -- complete with stunning photos, video and our first-rate reporting -- as they happen."

Anyway, that was the promise. After the jump, an example of "the journalism you've come to value" that he's hiding behind the paywall. 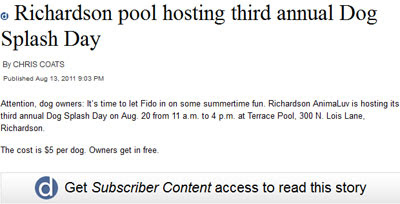 That's not to say the DMN doesn't still have talented journalists. It's just that they need other outlets for some of their best work. For example, Jeffrey Weiss, who hardly ever writes anymore about the RISD for the DMN and even more rarely writes about religion for the DMN (that section was axed by the DMN in an earlier cost-cutting move), now also writes for RealClearReligion.

Recently, he wrote this excellent analysis about how Michele Bachmann ducked a candidate forum question asking whether, as President of the United States, she would still "submit" to her husband as she once said she did concerning a major career decision in her life. Her answer that "submission" just means "respect" was a convenient interpretation of Scripture (convenient for her electoral ambitions). It shows the kind of flexible interpretation of Scripture more likely of, say, Unitarians or United Methodists than Evangelicals. Weiss rightly calls her on it.

Maybe next, Weiss can explore what another candidate, Herman Cain, thinks about letting Biblical edicts influence American government. He seems to be very concerned about letting religious law influence American government, at least when the religious law is Sharia. What about when it's a Biblical injunction for wives to "submit" to their husbands?

OTOH, thanks for liking the RCR stuff! OTOH, um, my output for the DMN was down the past couple of months because, well, it was summer. Which means school stories were hard to come by. And I did take some vacation time. Now that school is back and running you'll be seeing a story or two a week from me, most weeks. I had a pair of bylines today. And I do believe you'll find another one tomorrow. On topics of greater interest and import than "Dog Splash Day," though that sounds pretty good this afternoon.

Thanks for the feedback. I'm glad to hear your diminished output was seasonal, not permanent.