The Queen of Rage

Newsweek is catching a lot of criticism for its cover photo of Michele Bachmann. Some think it's an unflattering angle (true enough). Some say it shows her with crazy eyes (maybe, but crazy is in the eye of the beholder, no?). The caption, "The Queen of Rage," has made some ... how should I put this, crazy with rage? And some predict that the Newsweek publicity will end up working to the advantage of both the magazine (buzz) and candidate (sympathy).

Bachmann herself seems unperturbed. "Aha. Well, we'll have to take a look at that, won't we?" she said when a follower told her about the cover. Her reaction was described as being thoughtful and serious and "hopeful," even.

Hope. I've heard that word before somewhere. Maureen Dowd says Bachmann is stealing Obama's mantra, quoting her as saying at one campaign stop in Iowa, "The power behind our campaign is hope and a future. That's all I believe in."

Fair enough. Keeping all this in mind, I know how Bachmann can exploit this advantage throughout the campaign. Think Newsweek meets "Obama 2008." After the jump, the "Bachmann 2012" campaign poster. 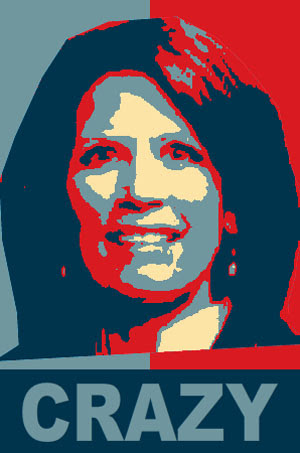 P.S. Today is the day of the Iowa straw poll. Straw poll means it doesn't count for anything other than bragging rights. It doesn't award any delegates in the 2012 nomination process. It's nothing more than a public opinion poll of the Iowa Republican voters. One poll among countless others. Still, those same Iowa voters have been able to manipulate that event into a critical milepost on the road to the GOP presidential nomination and, therefore, to the Presidential election of 2012.

It's likely to be the high point of Michele Bachmann's political career, the "shooting star" of the early 2012 Presidential election campaign. Come the Sunday talk shows, Texas Gov. Rick Perry is likely to steal the headlines from Bachmann. The rest of the GOP campaign is going to be a slug fest between Perry and Romney. You heard it here first.
at 8:45 AM