It's Hot. Is This the New Normal?

After the jump, is this normal?


This month, the National Oceanic and Atmospheric Administration (NOAA) released a new set of "normal" weather data. NOAA updates the "normals" every decade. The new set is based on averages from 1981-2010. This set will replace the "normals" previously in use based on averages from 1971-2000. In this new set, temperatures across the US were, on average, approximately 0.5 degrees F warmer. In Dallas, the 1971-2000 annual "normal" daily maximum temperature was 75.8 degrees F. In 1981-2010, it was 76.6 degrees F.

So from now on, when the meteorologist compares today's weather with what's "normal," remember that "normal" now means something just a little bit warmer than what was considered "normal" last year.

Robert Grumbine wasn't satisfied with that arbitrary 30 year look back. He wondered if there is a better way of deciding what "normal" is. Looking at monthly data back to 1850, he discovered that the temperature over the last 30 years has been anything but "normal." In fact, he observes:


"The last [month] the global mean was below the climate normal was March, 1976. If you're 35 or younger, you have never seen a global mean below climate's real normal."

With that in mind, let's reconsider Dallas's hot summer of 2011. The graph below shows the number of 100 degree days in Dallas each year since 1899 (but not yet including 2011). 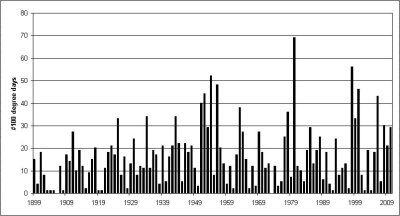 Notice that big spike in 1980? That really was a hot year. There are a few other spikes in there, some before 1980, a few more after. There's an ever so slight trend of an increasing number of hot days, but year-to-year it's highly variable. People living through it, even if they are over 35, and especially if they are over 65 (the early 1950s were a really hot, dry time), would not even notice the warming trend.

It looks like Mother Nature is frog boiling us.
at 8:11 AM