Of AEDs and Zoning 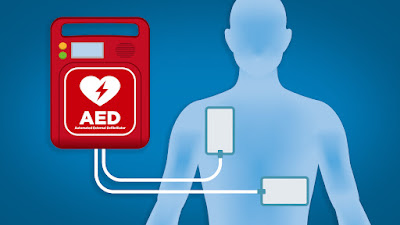 If you squint your eyes, it kind of looks like a city zoning map.

What do automated external defibrillators (AEDs) have to do with land use zoning? Well, nothing, but that didn't stop Richardson Council Member Ken Hutchenrider from going down a rabbit hole November 14 while deliberating a zoning change request (Zoning File 22-11). The trap was laid by City Manager Don Magner and Director of Development Services Sam Chavez. City staff has been hostile to this zoning change request for years. The property owner keeps coming back with revisions trying to meet the City's objections. The City keeps coming up with new ones. The latest is particularly egregious.

This is probably carrying the conspiracy thinking too far, but one can see how City staff might have figured that this objection might appeal to hospital administrator Ken Hutchenrider.

Next to the subject property, there's an existing office building. It's even farther from Fire Station #3. Unless there's a record of the fire department warning the city that they cannot assure the City that they can service that office building, raising this "consideration" for this new development is a bogus argument. Actually, even if there is a record of the fire department warning about an inability to service that office building, it's still a bogus argument here. The question should be what is the City's plan to address this deficiency in the City's emergency services? Rejecting a new application doesn't solve an existing problem, a problem owned by the City, not this property owner. When it was the developer's time to speak, he quickly disposed of this objection, saying he had contacted the fire chief himself, who told him that the Richardson Fire Department's response times are within the standards set by the City.

But that didn't occur to Council Member Ken Hutchenrider. He discussed this "consideration" like perhaps it was a problem the landowner needed to solve before giving his approval for this zoning change request. He asked about the possibility of using zoning to force the landowner to install automated external defibrillators (AEDs) in his proposed buildings. The City Manager curtly told him that a zoning ordinance is not the place for that. And that's what AEDs have to do with land use zoning. Nothing, except in the mind of some Richardson City Council members. Richardson's zoning system is broken. I'll have more to say on that in a future post.

at 10:30 AM
Email ThisBlogThis!Share to TwitterShare to FacebookShare to Pinterest
Labels: LocalPolitics