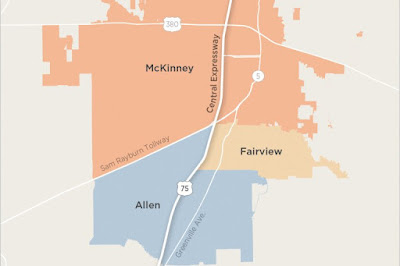 Tim Rogers of D Magazine wrote about the Central Expressway speed trap that exists called Fairview. If you don't know about Fairview, it's that's small city of 9,000 between Allen and McKinney east of Central Expressway. It makes up for its small size with hustle on the highway. Mile for mile, Fairview writes 3 times as many traffic tickets on Central Expressway as McKinney, and a whopping 35 times more than Allen.

As this is a Richardson-centric blog, here is the place where I should provide you, dear readers, with the number for our town. After all, the City of Richardson is embroiled in a lawsuit filed by two of its police officers alleging (with good cause in my opinion) that the City runs an illegal ticket quota system. How does Richardson stack up against our neighbors to our north with regard to issuing tickets on the highway? Unfortunately, D Magazine didn't get those numbers. Filing open records requests takes more and more effort and time to get results. I don't do it. So, I confess I don't have Richardson's numbers. All I can say is that if you're traveling north on Central Expressway, beware when you go through Fairview (and Richardson).

at 7:00 AM
Email ThisBlogThis!Share to TwitterShare to FacebookShare to Pinterest
Labels: LocalPolitics