TIL: "A Nation of Immigrants" 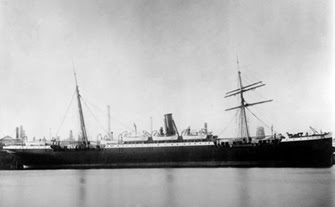 "A Nation of Immigrants." What country am I talking about? The United States, right? It's what I learned growing up in the 1950s. That, and the myth of the melting pot. I learned about how the English and the Irish and the Germans (like my grandfather in 1892) and the Italians all came to the United States in different waves of immigration, where they all learned English and intermarried and melted into one glorious people and nation. E Pluribus Unum and all that. But there was always a nagging problem for young me. The story didn't include the Chinese or the Negroes. Young me puzzled over such things, but I didn't find the answers in the patriotic school books. Now, decades later, I have to admit defeat on the melting pot myth. I have come to question the "nation of immigrants" myth altogether.

In an article in The Atlantic, "America Never Wanted the Tired, Poor, Huddled Masses", Caitlin Dickerson lays out the argument against the myth.

To call America a nation of immigrants is not wrong, either as a factual statement or an evocation of American myth. But that fact coexists with this one: Over the past century, the United States has deported more immigrants than it has allowed in.
...
Though the United States accepts more immigrants each year than any other country, the percentage of its population that is foreign-born is lower than in countries like Norway, Gabon, Sweden, Switzerland, and the United Arab Emirates—none of which considers itself "a nation of immigrants."
Source: The Atlantic.

By all means, let's adopt a more humane, fairer system of immigration, but that's because it's the right thing to do, not because such policies would be in keeping with American history. Our myths are not always based on facts. How we treat those immigrants bears no resemblance to how a nation that is proud to call itself a "nation of immigrants" would treat people.

When David Dorado Romo was a boy growing up in El Paso, Texas, his great-aunt Adela told him about the day the U.S. Border Patrol melted her favorite shoes. Romo’s aunt was Mexican and had a visa that allowed her to commute into South Texas for her job as a maid. Every week she had to report to a Border Patrol station, in accordance with a program that ran from 1917 into the 1930s requiring most Mexican immigrants to bathe in government offices before entering the United States. She would dress up in her nicest clothing, because those who looked dirty or were thought to have lice were bathed in a mixture of kerosene and vinegar. Years later, when Romo visited the National Archives outside Washington, D.C., he found photos and records of gas chambers where the belongings of the Mexican workers had been disinfected with the chemical Zyklon B, as well as a large steam dryer of the sort that had melted his aunt’s shoes. He discovered that a German scientist had taken note of the procedures being carried out at the American border and advocated for them to be implemented in Nazi concentration camps. Eventually, the Nazis increased the potency of Zyklon B in their gas chambers, and began using it on human beings.
Source: The Atlantic.

This is the second time in as many months that I learned of a connection between American discrimination and Nazis. First it was Jim Crow laws that inspired the antisemitic Nuremberg Race Laws. Now it's our immigration practices at the Mexican border and their inspiration for the Nazis' much more evil use of poison gas. In both American cases, however, it's hard to recognize either a melting pot or a pride in being a nation of immigrants.

This is an excellent observation in regard to the humane conditions at our borders. While every country has a sovereign right to enforce it’s borders, every sovereign nation has an obligation to treat mankind with dignity and respect to keep that sovereignty. As someone that has volunteered on a few occasions in helping with the young migrant kids that have crossed; I left feeling that such a temporary holding facility was less humane than a normal prison facility. We are a nation of corrupt bureaucratic ineptness where the melting pot of immigration being a political tool to collect votes and money for back room lobbying deals continues to be a source of angst for most facing our backwards facing immigration system. From the early days of places like Ellis island with the formation of the ghettos and political bosses that became very powerful, it seems we have continued that line of history today.