The Richardson City Council elections are officially nonpartisan, meaning no political party affiliation appears on the ballots. Traditionally, political parties steered clear of endorsements and campaigning. Those traditions are breaking down. Here's what I said about it in 2019.

The Richardson City Council elections in 2019 laid a muddy trail along the same lines, only with Democratic state representative Ana-Maria Ramos and Democratic Party affiliated groups working (and failing) to elect an unofficial slate of candidates for Richardson City Council. I won't be surprised if that trend continues in 2021 and my own appeals to keep local elections nonpartisan look even more like a cry in the wilderness than they did then.
Source: The Wheel.

In 2019, I criticized Democrats for blurring the lines of nonpartisan elections. In 2021, it's Republicans' turn to be called out. And not just any Republicans. It's a sitting Richardson City Council member, Kyle Kepner, who is openly campaigning for Republicans for Richardson City Council on social media. Kepner also shared the endorsements of the Collin County Republican Party for four candidates for Plano ISD school board. Kepner and the Collin County Republican Party have no respect for a tradition of nonpartisan local elections. 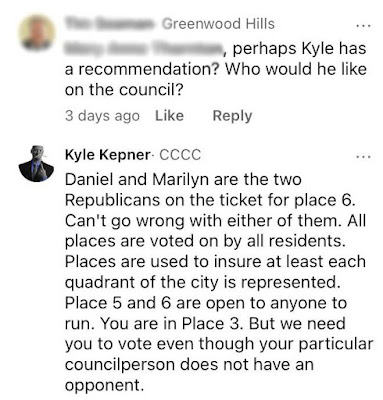 Kepner offered no reasons for his City of Richardson endorsements other than that they are "Republicans." Our state and federal elections are already tribal, where voters look no farther than the "R" or "D" after a candidate's name. Is that really helpful in municipal elections? What is the Republican Party position on potholes, I wonder? Because municipal elections are traditionally nonpartisan, we haven't had to worry about intrusion of party politics on issues like potholes. Council members like Kyle Kepner are breaking down that political wall. The City of Richardson will be the worse for it.

at 10:00 AM
Email ThisBlogThis!Share to TwitterShare to FacebookShare to Pinterest
Labels: LocalPolitics

In my memory, no Richardson City Council member, current or former, has ever made an endorsement of a council candidate on a politically partisan basis. That's new with Kepner, I believe.