Yesterday, I charged Richardson City Council member Kyle Kepner with violating the city's Code of Ethics by failing to maintain the city council as a nonpartisan body, when he endorsed two other council candidates for the sole reason that they are Republicans. He has since apologized...with a lot of extraneous word salad to go along with the meat and potatoes. To loosely paraphrase the original statement and the apology:

The sky is blue.
[...]
It was not my intention to give the impression that I believe the sky is any particular color. Besides, I'm the real victim here. They ganged up on me in 2019.

Eventually he gets to the meat of his apology. I accept him at his word when he says, "I made a mistake, and I am sorry...Please accept my apologies. I promise to learn from this and do better."

So let's take him at his word and accept the apology. Besides, there's another social media comment Kyle Kepner made on another subject altogether that needs attention. The subject is the mass shooting in Boulder, Colorado. Kepner's response raises the question, "Is Kyle Kepner too gullible or too reckless to serve on City Council?"

This social media comment was made March 26, just after the mass shooting in Boulder, Colorado. Kepner's comment, circled in red, is a response to someone else's comment about the shooter. 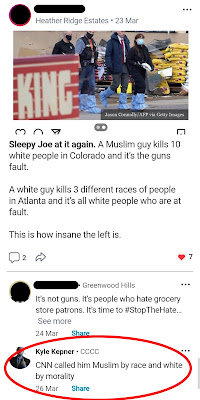 "CNN called him Muslim by race and white by morality."
Kyle Kepner

When I read that, my first thought was not about Kyle Kepner; it was about the truth or falsehood of the statement. Did CNN really say that? Really? CNN knows that Muslim describes a religion, not a race. So I was suspicious and did some fact checking. It took me all of 10 seconds on Google to find this article debunking the claim. One more click took me to the source of this satire, the Babylon Bee, a satiric website like The Onion. In short, CNN didn't say what Kepner said they did. But Kepner fell for it. Or something.

Only now did my thoughts turn to Kyle Kepner himself. Where's his empathy, not for the shooter but for the victims? Maybe he can't be bothered checking whether something he reads on the Internet is true or false before he shares it. Maybe Kyle Kepner is too gullible to suspect satire. Or maybe he's too reckless with the truth to serve on the Richardson City Council (Irving, maybe). Or maybe...I leave it to others to speculate whether there's another adjective other than gullible or reckless that might best explain what's at work here.