Richardson City Council member Kyle Kepner injected party politics into the nonpartisan city council race. That was bad enough, but then he compounded his error. I don't know which is more annoying to me, people making endorsements based on political party affiliation, or city council members endorsing in school board races (or vice versa). Today we examine Kyle Kepner's twofer. 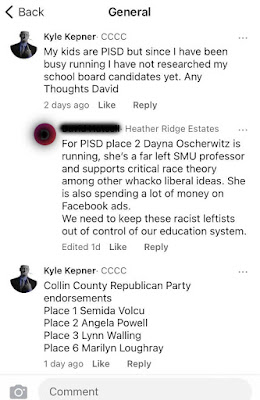 Kepner recommended four candidates for Plano ISD for no reason other than they were endorsed by the Collin County Republican Party. It's the only reason he gives. What's more, he prefaced that with, "I have not researched my school board candidates yet" and asks the opinion of someone who talks of "racist leftists" and "whacko liberal ideas." Then Kepner shares the slate of Collin County Republican Party endorsements. Maybe that's all the research Kepner needed. I hope Kepner seeks better counsel and puts more research into his City Council votes.

Kyle Kepner's lockstep Republican behavior is the best argument why local elections should be nonpartisan. There are pros and cons to having nonpartisan elections, but as long as that's what we have, political parties should steer clear.

I can't keep individuals from wanting to know whether a candidate is Republican or Democratic, but I can wish that people would ask other questions instead. When it's a local office-holder like Kyle Kepner behaving that way, I can bitch about it, too.

Most importantly in this instance, running a school district is hard enough. Trustees already hear plenty from parents, teachers, administrators, and homeowners. They aren't helped by having a city council member injecting party politics into trustee elections as well. Maybe the city council member ran for the wrong office.

Why don't you think that City Council should endorse ISD (and vice versa)? I get the example you gave - it being a completely partisan endorsement, but generally?

Elected officeholders need to serve with whoever wins the other electoral races. Cooperation is put at risk if an unendorsed candidate wins. This is true whether we are talking about endorsements for other candidates on the same body, or candidates on overlapping or neighboring political bodies.

P.S. Anonymous comments are discouraged and subject to deletion.