Of Bimbos, Dicks, and Pieces of Shit

The above two tweets were made by two candidates for Richardson's upcoming City Council election. I consider the tweets disqualifying in themselves, but especially so given the responses made by these two candidates after the recent embarrassment the City suffered over a City Council member's own use of social media.

Quick recap: In February, Richardson City Council member Scott Dunn tweeted this at a sitting US Congresswoman: "The embarrassment is to have bimbos like you with nothing between your ear [sic]."

When we last visited this embarrassing episode, only Mayor Paul Voelker and Steve Mitchell, among Richardson's City Council members, had condemned the name-calling. Since then...no one else on City Council has joined them. As far as I know, none of the other City Council members — Mayor Pro Tem Mark Solomon, Bob Dubey, Mabel Simpson, or Marta Gómez Frey — ever made any public statement on the matter at all.

A few candidates in the upcoming May election for Richardson's City Council did make statements. Janet DePuy posted, "Richardson deserves better than this type of behavior." She has also called for adding a section on proper conduct on social media to Richardson's Code of Ethics. Kudos for that.

Two other candidates, Mauri Long and Johnny Lanzillo also quickly issued condemnations of Dunn's tweet. Now their tweets above force me to reconsider the sincerity of those condemnations. 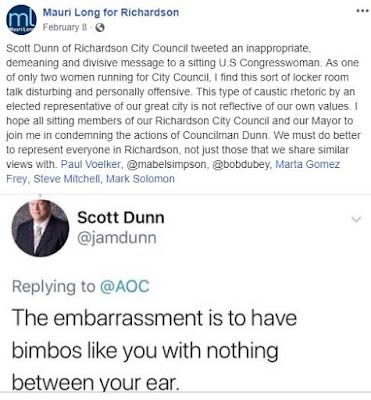 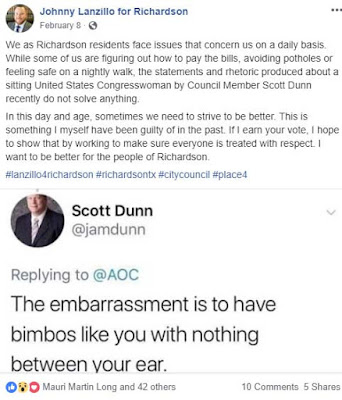 Those condemnations were written while the tweets at the top of this post were lying in the Twitter history of these two candidates, just waiting to be discovered. Mauri Long's condemnation makes no mention of her own tweet history. I can't read it now without feeling deceived. Johnny Lanzillo's condemnation includes an unspecific admission that "This is something I myself have been guilty of in the past." Yet he shows none of the grace towards Dunn that in hindsight I infer he is expecting for himself. Sorry, but I'm just not feeling it. (Update: Lanzillo's original February 8 Facebook post made no acknowledgement of guilt of similar past behavior by himself. That was added in an edit to the Facebook post on April 18.)
at 6:00 AM
Email ThisBlogThis!Share to TwitterShare to FacebookShare to Pinterest
Labels: LocalPolitics

Johnny Lanzillo posted this comment on Facebook:
"The tweets are certainly offensive, and I'm not looking for any grace.
I understand they're a problem, and I'm always ready to accept consequences for my mistakes and actions.
I apologize to everyone for my behavior on twitter. They are poor interactions, that going forward, I intend to avoid."

I would like to sincerely apologize for my incredibly offensive choice of words in reference to Sen Lindsey Graham. I crossed a line in my tweet. I accept responsibility for my actions and commit to responsibility in using social media

Mauri Long posted this on Facebook:
"I would like to sincerely apologize for my incredibly offensive choice of words in reference to Sen Lindsey Graham. I crossed a line in my tweet. I accept responsibility for my actions and commit to responsibility in using social media"

P.S. Mauri, your Blogger profile is set to private, so others cannot see that it was you who made the previous comment.

I’m not buying it. I’m not excusing it either but in this day and age, the rhetoric is high, the angst is real, the behind the screen opinion on others is alive and well and the glass house is made of highly non-shatterproof glass. We’re all over the line with pinions too freely given and it won’t make me vote one way or the other-it just reminds me that I need to keep a close eye on me and pad that house of mine like a hailstorm might be coming. Really respect all parties-I’m just not buying this as a reason for me to vote or not a certain way.