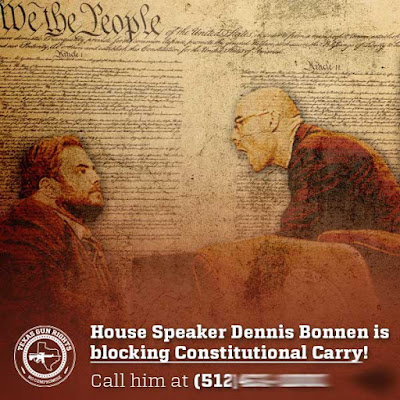 The last time these pages had to talk about Chris McNutt was November 26, 2018. Well, he's baaack.

According to The Houston Chronicle,


House Speaker Dennis Bonnen says Texas state troopers had his home in Lake Jackson under surveillance last week amid concerns that an outraged gun rights activist was headed there.

Chris McNutt, executive director of the nonprofit Texas Gun Rights, is advocating for a "constitutional carry" bill that would allow gun owners to carry their pistols, openly or concealed, in public without a license.

To catch everyone up, Chris McNutt was the treasurer for the "Vote NO" PAC in Richardson ISD, which led the campaign against the RISD borrowing money for school construction and maintenance. That's just one job Chris McNutt has had. Other gigs include running a political consulting firm that he says helped elect State Representative Jonathan Stickland. That's Stickland in the graphic above, being schooled by Texas House Speaker Dennis Bonnen. Maybe not coincidentally, Stickland was the only Texas House legislator to vote against House Bill 3, the bipartisan bill (148-1) that adds $9 billion to the public school finance system. Besides funding schools, what else is Stickland against? Any sensible gun regulations.

That brings us back to Chris McNutt's last appearance in these pages. It was an article, "Guns in RISD and the City of Richardson", commenting on Time magazine's cover story on guns, which featured not only Chris McNutt, but Richardson City Council member Mabel Simpson (a relative of McNutt), brandishing one serious-looking gun with a look on her face that could kill all by itself. McNutt's campaign for so-called "Constitutional Carry", the right to carry guns, concealed or open, anywhere in public or private, without a license, is what got him on Time's cover last year and this year took him to legislators' home neighborhoods to make his point. He thinks the solution to the gun violence problem in America is more guns. Guns everywhere. Actually, I'm not sure that reducing gun violence is a goal of his. He just seems to be for guns, regardless. Thankfully for the rest of us, the "Constitutional Carry" gun bill is going nowhere in the Texas legislature this session. According to the Texas Tribune, Stickland said he was "saddened by the act of a few individuals that have stolen the conversation about legislation that I deeply care about. … There is a right way and a wrong way to influence the legislative process. … It is never okay to target their homes or personal businesses when you know they are not in town." I do have to hand it to McNutt on one thing, making Stickland sound like the voice of reason in this case.
at 6:00 AM
Email ThisBlogThis!Share to TwitterShare to FacebookShare to Pinterest
Labels: LocalPolitics, RISD, StatePolitics

Richardson's own Chris McNutt doubles down on drawing attention to himself by getting into "pointless macho posturing" with Texas Speaker of the House over guns.

You can say and do what you want - it's your prerogative, but please don't try to do it under the guise of truth an accuracy, all while completely twisting my view on guns (I DON'T believe everyone should have them - especially criminals).

As far as the Bonnen charade, I implore you to do some more research. Watch the recently released bodycam footage from when I approached the DPS officers myself (i was never "intercepted", arrested nor detained)... After you watch that, put on your critical thinking hat and see if my actual actions, statements, or behavior warranted any of the baseless claims Bonnen made to the media. I never stalked, threatened, or harassed anyone. Never even spoke to a legislators family member. Wasn't even carrying a firearm while I peacefully distributed hundreds of flyers to dozens of neighborhoods across the state, in targeted legislative districts.

I was guilty of practicing nothing more than standard, grassroots-style campaign tactics. And the Speaker used the media to fabricate a story of threats and intimidation so he didn't have to take the heat for killing the bill that has been the #1 priority for the Republican Party of Texas for three sessions. So not some "fringe" issue, as even you probably believe.

The Speaker lied about everything and people like you just perpetuate the lies without doing any real digging or reaching out to the source... and for what? To promote your own agenda? or just to feel like you're important by weighing in on something you have no clue about? With you, I have a feeling it's both, since you seem to have dedicated some time writing multiple articles about me.

I could care less if you share my same political views or are diabolically opposed to them. Believe it or not, I have friends who are polar opposites with me politically. But i'm sure your readers would care if you were spreading false information, even if they don't agree with me politically. If they have some common decency at least... I like to believe those people still exist.

CHRISM (I assume that's Chris McNutt), thanks for the feedback. I am always interested in hearing if I have said anything that's inaccurate. Until I hear such, I stand by my own words. I have no interest in trying to resolve your personal dispute with Speaker Bonnen.