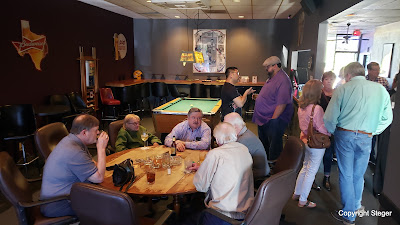 A meet-and-greet was held Friday afternoon for the Richardson Place 3 City Council candidates at The Forum Club on the upper level of the Shops at Promenade. Dan Barrios, Franklin Byrd, and Janet DePuy met and mingled with about 30 people in this Cheers-like neighborhood bar. Raymond De Guzman, Sr., and Mauri Long also made appearances.

But I personally have seen and heard enough of the candidates at other forums. I'm pretty sure I know who I'm voting for. It was the bar itself that brought me over to Richardson's west side. I called this a neighborhood bar. In truth, it would be a neighborhood bar if Richardson had, like, neighborhoods where residences and bars were in walking distance of each other. I drove. Once inside the bar, the neighborhood feel takes over. It's the kind of place where you don't feel you should just take any open seat at the bar, not unless you're willing to give it up when its usual occupant walks in the door (Norm!). The bar claims to be Richardson's oldest bar, open since 1979, but very recently is under new ownership. John Wayne Byrd of Arapaho Heights and Reid Robinson of Richardson Heights (see, I told you it's a neighborhood bar) acted all Sam Malone-like making everyone feel at home. So, as The Dallas Times Herald's drive-in movie critic Joe Bob Briggs might have said in 1979, "No dead bodies, no aardvarking, free drinks all around, Joe Bob says "check it out.""