"Einen veritablen Shitstorm." That's how Kronen Zeitung, a German-language Austrian newspaper, described the reaction to Richardson, Texas, City Council member Scott Dunn's ill-advised tweet. If somehow you've been on another planet for the last two weeks and don't know what I'm talking about, read the Recap. If you just want my opinion on the whole sorry mess (oops, I may have given myself away there), jump to "My Not-So-Hot Take".

President Trump gave his State of the Union speech to Congress. Peggy Noonen, conservative columnist for The Wall Street Journal, tweeted her opinion of Alexandria Ocasio-Cortez's looks during the speech. AOC replied, explaining why she didn't feel "spirited and warm." It was all too much for Richardson City Council member Scott Dunn, who added his own reply to AOC. Dunn tweeted, "The embarrassment is to have bimbos like you with nothing between your ear [sic]." 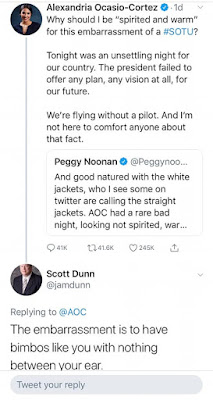 If Dunn thought his tweet would get buried in the 41,000 other replies that AOC's original tweet has received (and 245,000 "likes"), he was mistaken. Dunn's tweet went viral, showing up on Facebook, in The Dallas Morning News, The Washington Post, Time, The Daily Mail (UK), Der Spiegel (Germany), etc., etc.

The mayor of Richardson quickly issued a statement of his own, which said, in part, "I condemn the description of any woman in this manner as clearly inconsistent with Richardson’s values, as further articulated by the City Council's Rules of Engagement as outlined in our 2017-2019 Statement of Goals." The mayor made clear this is not a free speech issue. It's a matter of decorum. City Council members are expected "to engage in civic discourse that is civil in tone, respectful of others and designed to produce constructive outcomes for the betterment of our community."

About the same time, Scott Dunn himself posted an apology on Facebook. 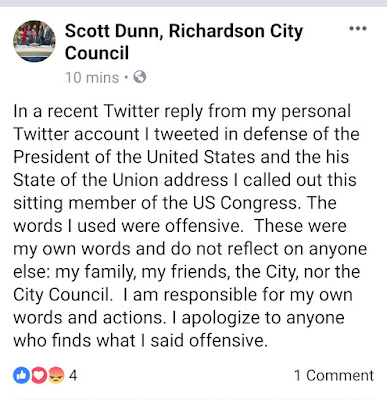 What did Dunn do wrong? If not before, then by kindergarten age, most children learn that name-calling is wrong. If you don't know that by now, there's probably nothing I can say to educate you.

Even if you don't care to live by kindergarten rules, there's a practical reason why Dunn's tweet was wrong. The City of Richardson has spent much time and effort marketing itself as a great city to live, work and play. It will be a long time before the black eye the city sustained because of Dunn's tweet heals. For months (maybe years — the Internet is forever), businesses considering doing business here, and families considering moving here, will Google "Richardson, Texas" and come across the shitstorm. We'll never know the cost of this.

The standard advice for responding to this kind of situation is threefold:
1) get the full story out quickly;
2) take responsibility; and
3) apologize.
How did Dunn do?

Dunn didn't admit to anything beyond his tweet in question, even though his Twitter timeline did exhibit a disturbing pattern of similar attacks on others, like Elizabeth Warren and Nancy Pelosi (you can guess the focus of these attacks). But instead of airing all of his dirty laundry, Dunn instead deleted his Twitter account. No screenshots have yet surfaced, to my knowledge. So he failed step 1, but it hasn't cost him.

As for step two in the standard advice, Dunn quickly took full and sole responsibility for his actions. Good for him.

As for step three, Dunn apologized, sort of. His apology was one of those "I'm sorry if you are offended" apology/non-apologies, and his justification ("defense of the President") doesn't really match what he said in his tweet. His tweet didn't mention the President or his speech or any of his ideas. It was all attack and no defense. His apology "to anyone who finds what I said offensive" prompts the question, who does *not* find what he said offensive? Worse, he deleted his apology when he deleted his Facebook account. (At least I think he deleted it; in any case, I can't find his account or his apology anymore.) In short, it was all less than a convincing apology.

At the first City Council meeting after the shitstorm, several residents of Richardson spoke in defense of Dunn. They weren't helping. One struggled to remember Alexandria Ocasio-Cortez's name—after a pause he finally got out, "Osaka". Another argued that the dictionary definition of "bimbo" was applicable to AOC, adding "The only thing [Dunn] did wrong was apologize." A third stated that "God wants Richardson to have a spiritual revival...For there is one God and one mediator between God and mankind, the man Christ Jesus." He said he called Scott Dunn and Dunn wept on the phone with him. All heartfelt, but none of it excusing the name-calling at issue.

What about others? Major props to Mayor Paul Voelker, who wasted no time in condemning the name-calling in a press release in his role as mayor. He took a stand on a controversial issue. A Profile in Courage. Props also to City Council member Steve Mitchell, who quickly shared the mayor's statement on Facebook, adding, "Disparaging comments made by anyone which divide - rather than unite - our great city and country are simply not acceptable."

And that's it. As far as I've seen, none of the other City Council members — Mayor Pro Tem Mark Solomon, Bob Dubey, Mabel Simpson, or Marta Gómez Frey — have made any public statement on the matter. At the City Council meeting, only the mayor spoke. The silence from the others was deafening. Even Steve Mitchell was silent and didn't repeat his Facebook comments for the Council's official record. Profiles in Courage, not.

Only some of the new candidates for City Council made public statements. Janet Depuy posted, "Richardson deserves better than this type of behavior." Mauri Long posted, "I hope all sitting members of our Richardson City Council and our Mayor to join me in condemning the actions of Councilman Dunn." I have seen nothing but silence from the other candidates.

Update: Johnny Lanzillo also issued a statement on his campaign Facebook page saying he was "severely disappointed." I apologize for omitting this in my original post.

[This space is reserved for corrections. I admit to not doing an exhaustive search. If any City Council member or candidate wants to correct me and point to their public statements on this issue, I'll apologize and correct this post.]

Scott Dunn himself spoke at the City Council meeting, but he didn't help himself. He apologized to his school teachers for his bad grammar, as if bad grammar was the issue here. He explained his previously issued apology as taking "ownership of a settlement to protect this City and the Council's reputation," by which I infer that the apology was less heartfelt than a way to shield others from criticism, too. His self-justification was over the top, including condemnations of "socialism" and "abortion." He said he "does not apologize for standing on the side of life," as if calling someone a "bimbo" is standing on the side of anything but bad behavior. A simple, "I apologize. Period." would have been better, but it was even less present in Dunn's City Council statement than in his now deleted Facebook post.

Another Richardson resident, a recent transfer, during her own five minutes of open mic, said Richardson "is a warm and welcoming community with a diverse citizenry. Richardson...is much more than I could ever have dreamed. That is why the comments of my council representative cut so deeply. His words in no way reflect the Richardson I have come to know and love."

So, just in case you are someone coming across this post in the future when researching Richardson as a place to live, work, or play, please note that this Richardson resident's words more accurately represent Richardson than what the tweets and subsequent words by one of our council members might lead you to believe.

Where To From Here?

Scott Dunn's time on the City Council ends in May. He was a lame duck even before his ill-advised tweet. I suspect his decision not to run for re-election made him feel free to make an increasing number of such tweets in recent months. In any case, let's not dwell on Dunn, but let's not forget, either. The rest of us can be most productive by looking to the May elections to elect candidates who best demonstrate that they will live up to the high expectations of respect and professionalism in service of *all* residents of Richardson.

I disagree wholeheartedly with Scott’s tweet about AOC. It was incorrect, wrongheaded and inappropriate. However, to add a bit in his defense - He proceeded his “if I offended anyone” comment with a simpler statement that it was wrong and inappropriate.

Steve Benson, thanks for the comment. Maybe I should have given Scott Dunn more credit for his apology. He did say, "The words I used were offensive." If he had followed that with "I apologize for using offensive words" it would have kept the focus on himself, instead of turning it on "anyone who finds what I said offensive." This is a subtle distinction and I probably should not fault Scott Dunn for not catching it.