TIL: Whatever were the Founders Thinking? 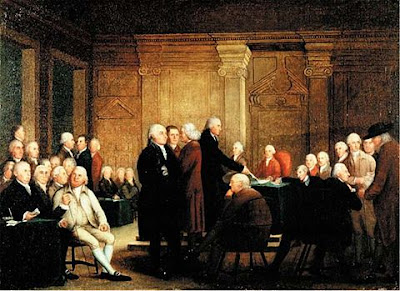 Growing up, I heard a lot about what the Founders were thinking when they drafted and adopted the confusingly worded 2nd Amendment to the Constitution. The dominant argument (by NRA types) was that the Founders intended the right to bear arms as a safeguard against tyrannical government, a protection should an evil King George III ever arise again and seek to take away our precious liberties. It seemed to be a compelling argument to my young self. But it wasn't the last word on the subject.

Later I learned that the NRA itself had earlier promoted a different theory. In the 19th Century, the NRA promoted marksmanship training in support of the Founders' supposed intent of ensuring the country's military preparedness against foreign invasion. That explained that odd "well-regulated militia" clause in the 2nd Amendment. A militia was more likely to be called out by the government than defend the people against the government. And, certainly, a well-regulated militia is not what a homeowner needs to protect himself against an armed home invader intent on stealing his stuff in the middle of the night. It all seemed to be that the NRA had it right the first time. It was a compelling new argument for what the Founders had on their minds.

But recently, I came across a quote by none other than Founder and early American hero Patrick Henry that calls all those earlier explanations into question:

in 1998, the legal historian Carl Bogus published an influential essay suggesting that this was the hidden purpose of the Second Amendment. "If there should happen an insurrection of slaves," Patrick Henry declared, during a debate over ratification, in 1788, the states "ought to have power to call forth the efforts of the militia, when necessary."
Source: The New Yorker.

There it is. The Founders did want a trained, armed militia to safeguard the state against...what? Not a foreign invasion, but a slave rebellion. It all makes a lot of sense. What were those plantation owners, who made up a lot of the Founding Fathers, most threatened by? Not that King George III was coming back. The vast Atlantic Ocean provided protection against that. Not a one-off armed home invasion by someone wanting to steal their stuff. A militia is not going to be there in the middle of the night when a burglar breaks in. No, what the Founders were really in fear of was an insurrection by the people they kept in slavery. An insurrection that could only be put down by calling out a militia. Ensuring that the militia members had ready access to firearms, and were well-regulated and trained, was essential to the plantation owners' lives and property. Fear that an enslaved people might rise up against that slavery was enough to enshrine in the Constitution the right of slaveowners to bear arms.

For our nuanced-enhanced readers, I'm aware that multiple people might have multiple reasons to support an action. I'm just here to remind y'all that racism is often one of the reasons that explains 18th Century America behavior.

That is shocking but not surprising and certainly seems more than obvious given, as you say, so much of the "founding" of this (and likely other) country. What rings so true for me, though, is the thought that many who support this rabid, unbridled 2nd amendment right, are still protecting themselves against an uprising of the enslaved.

Many of the founding fathers were connected to Scotland. I think the brutal disarming of Scotland by England was a major factor in this amendment. They wanted to be able to defend themselves against government aggression since they had personal experience of not being able to.

Marcia Grau, thanks for the comment. That's also a compelling argument. Did any Founders mention Scotland in any debates? Regardless, I'll revise my thesis: racism and Scottish history each played a role in drafting the 2nd Amendment.