Single-Member Districts in RISD are a Winner

The recent election for two Richardson ISD trustees completes the transition to a new election system that consists of five single-member districts and two at-large places. Or rather, the run-off election June 5 for the at-large Place 7 will complete the transition. And if there's anything that demonstrates the need for single-member districts it's the voting map for that at-large Place 7 election. 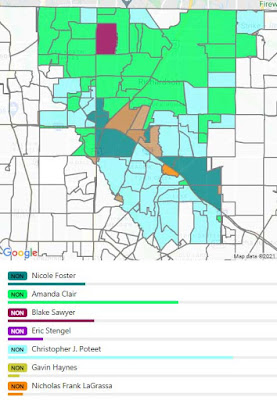 If I were a better map-maker, I would overlay the new RISD districts on this map of the voting results. But it's easy to describe what you would see if I did that. Across the north of the RISD, Districts 1 and 2 would cover that vast green swath (Amanda Clair voters). Across the south of the RISD, District 5 covers that vast light blue swath (Chris Poteet voters). In between, District 4 is that stretch of dark green (Nicole Foster voters) along I-635. District 3, where north and south meet, appears to be, at least in this election, a free-for-all. The brown areas have no voters (e.g., Restland Cemetery, which only votes in Presidential elections).

The geographic divide in RISD reflects political divides. This maps shows it clearly. Having seven at-large districts (the old system) can theoretically lead to one highly active area (let's say, Lake Highlands) turning out in numbers sufficient to elect the whole board. But having single-member districts (the new system), one area can only count on electing one board member (from their own district) and two more board members from the two at-large places. This would give them three board seats, not a majority. Since we're using Lake Highlands in this example, it also means that Lake Highlands can't determine who represents the Berkner area or the Pearce area or the Richardson HS area. That's how it should be.

The bottom line? Even though I was slow to come around to supporting single-member districts, I'm fully on board now. This map is the reason why.

P.S. The City of Richardson needs single-member districts, too, but the case is not as obvious using its map of election results.