It's All About Housing 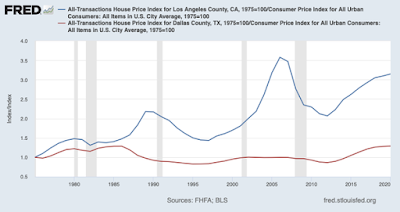 Texans are always comparing the state to California. I know because I live in Texas. I don't know if Californians compare their state to anyone else. One claim Texans always make is about how many Californians are moving to Texas. There's no doubt that the two states are on different trend lines. Texas is set to gain three Congressional seats in the 2020 census. California, for the first time ever, is set to lose one. What's behind this? Texans usually credit the lack of a state income tax or the light regulation on business. Paul Krugman, in his latest newsletter, points to another cause.

Krugman's explanation is found in that graph above. The blue line in that graph above shows that real L.A. housing prices (i.e., adjusted for inflation) have tripled since the mid-'70s. Krugman says, "it turns out not to be affluent, highly educated residents fleeing those 'job-killing taxes.' People like that are still moving in. Instead, lower-income and lower-education residents are leaving, probably because housing is so unaffordable."

Krugman calls the "liberal" housing policy in conservative Texas the secret to its population growth. Builders face fewer obstacles in Texas to building new housing. The red line in that same graph shows that real Dallas housing prices have barely budged since the mid-'70s. What's behind that? It isn't a welcoming attitude to apartments, four-plexes, duplexes, and "accessory dwelling units" (so-called granny flats) in our built-out cities. Neighborhoods here seem just as opposed to them as Californians are. Maybe the people we elect to government in north Texas tend to be more open to such building options, but the neighbors aren't. My guess is that it's probably more about sprawl. In north Texas, governments and neighbors are both fine with new housing, as long as it's in those cotton fields up north.

at 6:00 AM
Email ThisBlogThis!Share to TwitterShare to FacebookShare to Pinterest
Labels: StatePolitics

Which is why it’s not a safe assumption that those liberal Californians are moving here to turn Texas into California.
Ginny

It is anecdotal but I discussed this with a Californian on an America Talks! meeting yesterday. He said many retirees from San Jose are relocating to Arizona, Texas and Nevada because the profits from selling extremely expensive homes in San Jose will go so much further in low-tax states. Whether they recognize what drove them out and restrain themselves from recreating the issue is open to debate.

Back in the 1940's when my grandparents moved to Arizona it was because their children had severe allergies in Illinois. This was also a reason others migrated to the desert. However, they missed the familiar plants, replanted them and now Arizona is no longer good for people with allergies. There is a parallel to be drawn there, I think.

Marcia Grau, I'm sure you're right. Retirees are moving from high price areas to low price areas, and regarding housing prices, Texas is one of those states where you can trade a high priced home for a reasonable priced one, provided you drive far enough out of the cities, which many retirees want to do in any case. It's one reason why Montana is booming, too. As for allergies, my aunt moved from Wisconsin to the southern California desert in the 1950s because of her husband's allergies. Soon everyone in southern California wanted lawns just like they were used to. Like you said, you can run but you can't hide.