RPD is Eager to Move On 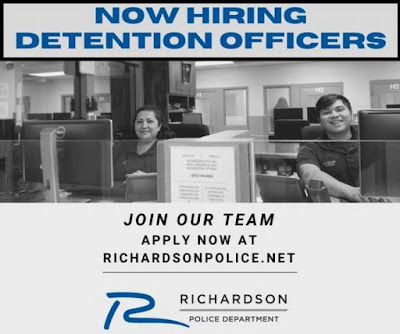 The Richardson Police Department is eager to move on. Not everyone. The rank and file still have a complaint they want investigated. Let's just say the City Manager, to whom the department reports, wants to move on. From what, you ask? Pull up a chair. This will take a while.

The nominal need to move on is that long-time Police Chief Jim Spivey is retiring at the end of May. So, in a Friday news dump, the City named Assistant Chief Gary Tittle as the new Police Chief effective June 1. But before we get distracted by the new chef, we have some other pots simmering on the stove to deal with.

Chief Spivey is retiring with a cloud hanging over his department's head. And as the head of that department, that means his head. Three clouds, actually. One is that a member of his police force accused the department of running an illegal ticket quota system. She claimed that supervisors were behind the illegal scheme. Did Chief Spivey know? Did Assistant Chief Tittle? Dunno. No allegations have been made that either of them were behind the quota system, but one officer says the numbers and targets were posted where the whole department could see, so it's hard to believe they weren't aware of it. Their defense might hinge on technicalities in how the state law does or does not define a quota system. If so, that's not a good defense to have to fall back on. To the average citizen, if it looks like a duck and quacks like a duck, it's a duck.

The City Manager said that the ticket quota allegations are "getting our full attention." Apparently, not quite his full attention. The City Manager still had time left over to conduct interviews of applicants for the chief's replacement. He saw no need to delay picking a permanent replacement while the investigation into these "serious matters" was carried out. For a City whose Code of Ethics calls on officials "to avoid even the appearance of impropriety", the process of finding a new police chief while this investigation is ongoing appears unseemly hasty to me.

The second cloud is a federal lawsuit filed by a Garland man, who claims that after a traffic stop in Richardson, an RPD officer "brutalized him due to race." The City refuses to comment on the lawsuit. Court filings indicate that the defense has claimed "qualified immunity." Presumably the City is confident the lawsuit will be dismissed. You can't sue the police. That's not exactly how the law puts it, but pretty much. It's more like you can sue, but you can't win. The officer "received a written reprimand for escalating the Bonham traffic stop, but he didn't admit fault and said he would do it the same way again." To me it sounds like the officer and his superiors agreed to disagree. The courts have already agreed with the Garland man on the reason why he was stopped in the first place (the charges were dismissed). Now we'll see what they say about his allegation of being brutalized due to his race. It's already a lose-lose situation for the RPD no matter what.

There's a third cloud over the RPD arising from that traffic stop. It's how the Garland man was treated in Richardson police detention.

For the first three days in the Richardson lockup, Bonham sat in an isolation cell. He wasn’t allowed to shower or brush his teeth. After the third day, he was transferred to a normal cellblock.

The phones in the cellblock weren’t working, so Bonham asked if he and the other inmates could be transferred to another cellblock. "I told them that the phones weren’t working. The officer that spoke back to me, he said ‘That’s not my problem, you’re in jail,'" Bonham recalled.

Under his breath, Bonham mumbled, "You guys are acting like some bitches." The officer asked what he said, but Bonham just returned to his cell.

Then, the officer’s supervisor showed up to ask Bonham what happened, so he explained. But then the supervisor "just snapped," Bonham said, explaining that he "went from zero to a hundred."

" 'You can’t call my officers no bitch!' " Bonham remembered the supervisor screaming in his face.

Before turning around to return to his bunk, Bonham looked at the supervisor and said, "You’re a bitch. Your deputy's bitch." Then, one of the officers struck him in the back of the head. Before he knew it, an officer had him in a chokehold on the ground. They dragged him from there to an all-concrete cell.

Is this true? Is the detained man lying? Is there video? Did Chief Spivey know? Did Assistant Chief Tittle? This week, the RPD advertised that it is hiring detention officers. Is it unreasonable to want to know if there's any connection between alleged mistreatment of detainees and the current job vacancies? Or if the new hires will get any different training than the old ones did?

In the summer of 2020, during the peak of the "Black Lives Matter" protests, Chief Spivey appeared before the City Council to assure the council (and the City at large) that all was fine inside the department. The council members were all graciously deferential to the chief. No one asked any questions that would have led to the chief revealing a traffic stop of a black man by a white officer that resulted in a written reprimand to that officer. No one asked about the practices at the City's detention center. No one asked whether the RPD ran a ticket quota system. No one asked whether the chief and his assistants ran a tight enough operation that they would even know if any abuses occurred on their watch. Instead of tough questions, the council members asked softball leading questions like, "Is it fair to say we have a very pro-active process?" I have to wonder if a public townhall meeting might have been more revealing and useful, a meeting where members of the public can share their own stories of encounters with RPD officers and ask the Police Chief and City Manager their own questions.

Do you see where I am going with all of this? There are enough allegations, questions, and doubts about what's going on in RPD to at least let ongoing investigations play out before naming a new permanent police chief from inside the RPD. But that's not what City Manager Dan Johnson did. So the new police chief will take office with a cloud hanging over his head. The City Manager might be ready to move on, but without having first conducted thorough independent and public investigations into all this, suspicions will linger forever. That's not fair to retiring Chief Spivey, to new Chief Tittle, and most of all to the citizens of Richardson. I'm not ready to move on just yet. No one else should be either.