Marilyn Frederick Will "Fight Back Against the Radical Left's Agenda"

Marilyn Frederick will "fight back against the radical left's agenda." Those aren't my words. Those are the words from an endorsement that Marilyn Frederick herself posted to her campaign's Facebook page. The quote is from the Chairman of the Republican Party of Texas, Allen West. 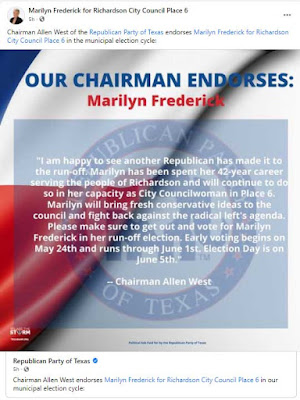 You know what I think about political parties inserting themselves into nonpartisan local elections. (If you're new here, let me tell you: I hate it.) It doesn't matter if it's Democrats or Republicans. I'm not against political activists working in local elections. By all means, pick a candidate, support him or her. But leave your party affiliation at the door. Fixing potholes is not and should not be a partisan issue.

I don't know if Frederick approached West for his endorsement. She sure didn't decline the endorsement on the grounds that she wanted to run a nonpartisan campaign. By putting it on her own Facebook page, she's now running a full bore partisan campaign.

Even if Allen West were not the Chairman of the Republican Party of Texas, I still wouldn't want him messing with Richardson elections. If you don't know why, Google him. I'll wait. Let's start with QAnon. Allen West is scheduled to be a featured speaker at the QAnon-linked "For God & Country Patriot Roundup" over Memorial Day. He's the man who brought a new logo to the Republican Party of Texas when he took it over. Look at that logo on the bottom left of Allen West's endorsement of Marilyn Frederick. It's small in this photo, but trust me: it says "We Are the Storm". That's a logo used by QAnon. And now, Marilyn Frederick has put it on her campaign page. It's a dog whistle for the extremists. They can hear it loud and clear even if it means nothing to you.

One thing you can be sure of. Allen West would never have adopted the COEXIST logo instead of the QAnon logo.

Here's what Allen West said about that COEXIST bumper sticker:

"Every time I see one of those [COEXIST] bumper stickers, I look at the person inside that is driving. Because that person represents something that would give away our country. Would give away who we are, our rights and freedoms and liberties because they are afraid to stand up and confront that which is the antithesis, anathema of who we are."

So coexistence of religions in America is "anathema." That's the Allen West who endorsed Marilyn Frederick. That's the Allen West Marilyn Frederick features in her campaign. I think Marilyn Frederick needs to explain who she is. She needs to stand up and confront the bigotry of people like Allen West, not proudly accept his endorsement of her. There is an alternative to vote for in this runoff. I urge everyone to vote for that alternative: Arefin Shamsul. I endorsed him in the May 1 election. Here is an excerpt of that endorsement: "Arefin Shamsul's experience with municipal infrastructure and volunteer community service makes him well suited to address Richardson's perennial infrastructure challenges." In other words, Arefin is focused on potholes, not dog whistles.

Marilyn Quirk Frederick posted a response about the Allen West endorsement on her personal Facebook page.

"Fresh Conservative Ideas" is an oxymoron.