Rally at the (Texas) Capitol 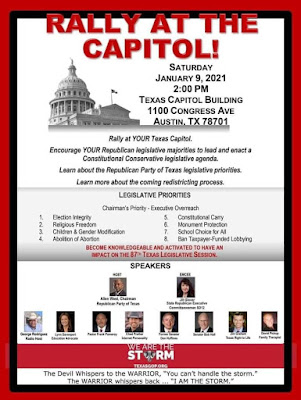 If you expected Wednesday's insurrection at the US Capitol to cause extremist Republicans to pause, you were wrong. Texan Republicans are advertising a rally at the Texas Capitol just three days later. There are two things about this poster that drew my attention. First is the slogan at the bottom that ties Texas Republicans directly to QAnon. And, second, one of the featured speakers is a former candidate for Richardson ISD school board.

"We are the Storm" is the slogan of QAnon, which, if you don't know at long last, is according to Wikipedia, "a disproven and discredited far-right conspiracy theory alleging that a cabal of Satan-worshipping cannibalistic pedophiles is running a global child sex-trafficking ring and plotting against US president Donald Trump." QAnon was well represented among the insurrectionists who stormed the US Capitol on Wednesday. By adopting this same slogan, that's who the Republican Party of Texas officially identifies with.

Now for the connection with Richardson ISD. One of the advertised speakers at the rally is Lynn Davenport, identified as an "Education Advocate." Don't let her pretend she speaks FOR public schools while participating in rallies like this. Look at the "Legislative Priorities" that the rally pretends to educate rally attendees about. #7 is "School Choice for All." This is code for diverting tax dollars from public schools to private schools, weakening public schools in the process. Lynn Davenport's association with the "Storm" offers aid and comfort to QAnon insurrectionists through rallies like this. Voters in RISD exercised good judgment when they rejected her at the ballot box. Continue to exercise good judgment today by rejecting the calls from the speakers who speak for the "Storm."