Richardson Police, It's Time to Step Up 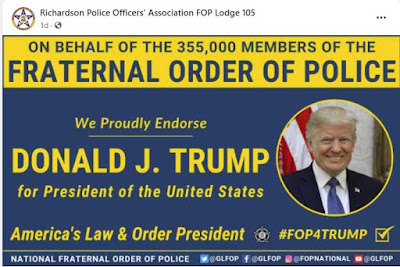 Local democracy can't survive if our national democracy fails. A week ago, I called on local politicians to step up and take a stand and condemn the President of the United States for inciting an insurrection at the US Capitol.

Today, I extend that call to the Richardson Fraternal Order of Police. The President of the United States incited an insurrection that resulted in the deaths of five people, including one Capitol Police officer who was beaten to death by a Trump mob. That's the same president whom the Richardson police "proudly endorsed" in November. That endorsement must be retracted. The president cannot "Back the Blue" while calling on the mob to storm the Capitol and overwhelm its police protection. The president cannot be for "Law and Order" while inciting insurrection. And the Richardson police cannot have our trust and respect unless they renounce their endorsement of President Trump. Richardson Police, it's time to "Back the Blue" yourself and admit your mistake in endorsing Donald Trump for President.

So far, my call to local politicians has received only two responses (from Mayor Paul Voelker and from Joseph Corcoran, candidate for Richardson City Council Place 4). That's out of 14 people who have picked up candidates' packets from city hall. That's not a good showing for defending democracy at home. Don't expect me to vote for you if you are silent while American democracy hung in the balance.

Mark, is there something Richardson Citizens can do to support this request and put pressure on RPD and council candidates?

"The Blue Wall of Silence" by Adam Serwer at The Atlantic: "The National Fraternal Order of Police isn’t usually bashful about defending officers, but it’s been conspicuously subdued in discussing the January 6 attacks." Richardson FOP Lodge, what say you?