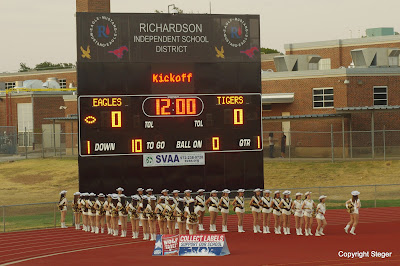 Richardson ISD trustees approved replacing the scoreboards at the district's two stadiums. Their justification included this detail: "The upgraded scoreboards will offer enhanced video capabilities...The new, digital scoreboards will allow RISD to generate increased revenue from advertisers." We've been down this road before, in 2011 when the current scoreboards were installed (without video displays). Then, I called video scoreboards for high school athletics a "dumb idea." I am still against them today.

Here is my argument against video scoreboards from 2011:

What we'll get are video commercials for Walmart playing over the band. And animated cartoon prompts like "D-E-F-E-N-S-E" substituting for real, live cheerleading by students. Video scoreboards end up crowding out the kids...If you care about the kids, you would never think of installing something like video scoreboards.
Source: The Wheel.

To be completely fair, the RISD offers one justification for video scoreboards that's new since 2011, one that I can get behind. The district now holds graduation ceremonies in the stadiums. I can certainly appreciate the benefits of using large video screens to show graduating students receiving their diplomas. So, I'll consider withdrawing my objection to this decision by the school board, on one condition: that the RISD Superintendent, or Athletic Director, or whoever has decision-making authority over selling video commercials during football games, pledges NOT to do so. Video screens should not be used to crowd out student performances at the games.

I don't have any evidence for what I'm going to say next, but I am skeptical of the reason the RISD gives for why this decision was made now: "The timing of the bond process precluded having new scoreboards in time for the 2021 graduation ceremonies, so the district proposed replacement outside of the bond package to expedite availability of the equipment." While that may be obviously true, replacing the scoreboards outside of the bond package also happens to eliminate a $2.4 million item from the bond package that is likely to be controversial. It's an item that is hard to justify for academic reasons. Now, it'll be a done deal by the time voters go to the polls. Call me cynical, but I have to suspect that consideration played more than a little role in the decision to spend the money without asking voter approval.