Dollar Tree: The Next Generation 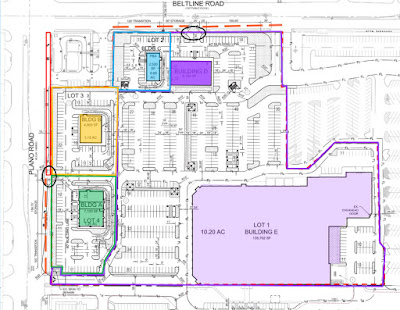 The Richardson City Council approved rezoning for the construction of new pad site restaurants and a partitioning of the former Sears store at Richardson Square. I've blogged my opposition to this short-sighted plan again and again. My opposition wasn't softened by the council's deliberations.

It's not that I'm against Jason's Deli or Chipotle. I'm against making the same mistakes made forty years ago just down the street to the east. Look at Belt Line between Richardson Square and Yale Blvd. When that stretch was developed it had the supermarket and popular casual dining that neighbors are asking for today. First, tell me whether you are happy with how that site has aged. The grocery store has been partitioned into a Dollar Tree and a second-hand clothing store. The Applebee's is now a sports bar that makes the news for all the wrong reasons ( "Shots fired during fight outside Richardson sports bar"). Second, tell me how this new proposal is going to be any different in another twenty years. Speaking in opposition, Andrew Laska said he had done the research to show that pad sites developed 20-40 years ago have lost significant tax value. "That's your tax revenue going out the window by picking bad land use," he warned. If anyone on City Council had data to rebut him, they didn't offer it. Without doing any homework themselves, they insist on making the same mistakes.

By the way, the Dollar Tree store is on the books at DCAD as "Safeway8." The Bingo parlor at Belt Line and Jupiter is listed on DCAD as being owned by Randall's Food and Drug in 2003. Randall's owned Tom Thumb. And the LA Fitness across Belt Line from Richardson Square used to be a Tom Thumb. And the YouFit Health Club catty-corner from Richardson Square used to be an Albertson's. The point is, lots of grocery stores have come and gone from that stretch of Belt Line. Which is why the brands are less important than the form. The brands come and go. The form persists forever.

But that's not how the neighborhood sees it. They see only a vacant Sears store and a white knight promising renewal. As one speaker said, "We have hope again." Neglect an area for forty years and neighbors see any attention as a good thing. Dangle the names Jason's Deli and Chipotle and hungry people will follow you anywhere. As Richard Fariña said, "Been Down So Long It Looks Like Up to Me."

Ken Hutchenrider's only careabout was that the developer get the support of the neighborhood. He did that, so Hutchenrider was a yes. We don't need a council member for that. We could put a weathervane on the dais for that. Up your game, Ken. Next time, tell us why the people are right.

Kyle Kepner also supports the rezoning because the neighborhood supports it. He said he's heard from a lot of people who are excited about a Trader Joe's going in there. Kepner then warned that it wasn't "super realistic" to expect a Trader Joe's or Sprouts to go in there. Even though he knew that many neighbors' expectations were unrealistic, he cited their support as the reason he voted yes.

Steve Mitchell was thrilled by the enthusiasm of the neighbors who spoke in favor. His vote was in favor of what the people want. Mitchell asked Laska, if not this, then what? Laska said he didn't know. There are no alternatives to point to because no one has developed them. This area of Richardson has been neglected in city planning for years. That's not a knock on developers. That's a knock on the City. The City Council itself should have been ready to answer Mitchell's question. The fact that it isn't is an indictment of the City's own lack of homework for many years.

This was my assessment a month ago.


With a city council who think of their jobs as neutral judges passing judgment on the projects brought to them, "yes" votes on projects like this are inevitable. The time for the City to shape this development into something better was two years ago, not at a public hearing in 2019. With a different city council, one with a vision for what our city could be, and the time, effort, and will to engage the public *before* specific projects are brought to the council, we might have gotten different, and better, results. But that's not the council we have. The irony is they will be praised for listening to public demand for this sub-optimal development. And feel good about themselves with the result.

And that's exactly what happened.

Janet DePuy said her own vision would have been for something like a village, with tenants facing into the center of the village. Ding! Ding! Ding! Finally someone on the City Council revealed an understanding that there are other fish in the sea. But then she acknowledged that the developer is under a lot of pressure and she doesn't want to wait too long, so she decided to just quit fishing and voted yes. She did ask whether the developer could be required to seek council review before future changes of tenants. The developer told her, politely, to forget that. He said the properties are zoned for retail and he can put anything he wants in there. The only reason he's here at all is for the zoning changes needed for drive-throughs at the pad sites. He said this all politely, of course.

Mark Solomon is still concerned about the traffic on the corner, the turn lanes and signal light timing. Not concerned with the form, not the tenants, but the impact on cars. With a scheduling concession on that by the developer, Solomon voted yes.

Let me close with one sound bite that captures how our thinking is still stuck in the 1980s, that car-centric era. Paul Voelker asked the developer how one would walk from Sears to Bldg C. The answer? "The best way is to walk around Bldg D to be safe instead of trying to fight traffic with the drive through."