The 2nd US Circuit Court of Appeals upheld a New York judge's ruling and found that [President Donald] Trump "engaged in unconstitutional viewpoint discrimination by utilizing Twitter's 'blocking' function to limit certain users' access to his social media account, which is otherwise open to the public at large, because he disagrees with their speech." ... The judges on the appeals court concluded that "the First Amendment does not permit a public official who utilizes a social media account for all manner of official purposes to exclude persons from an otherwise-open online dialogue because they expressed views with which the official disagrees."

After the jump, my own experiences being blocked on Twitter.

A couple of years ago (I don't even know exactly when) I was blocked by Texas state representative Jason Villalba. I don't know what caused my punishment, so I can't say for sure I didn't deserve it, but because I was surprised and puzzled when I found myself blocked, I'm pretty sure I didn't deserve it. But because he wasn't my representative and, besides, he has since been defeated for re-election (I like to think plugging your ears to the public helps bring on such karma), I think this issue is dead.

I was also blocked on Twitter by The Dallas Morning News editorial board member Rod Dreher, but that was long, long ago, before he left The Dallas Morning News for more reactionary pastures. He, too, didn't bother to explain what tweet of mine set him off. Again, let me claim I didn't deserve it. In the words of 2nd US Circuit Court of Appeals, I only expressed views with which Dreher disagrees. But I understood, as President Trump doesn't, that the 1st Amendment prohibits censorship by government, not by private businesses like The Dallas Morning News or its employees. If Rod Dreher wants to block me, I might think it's closed-minded (and I do), but it's his Constitutional right to do so. 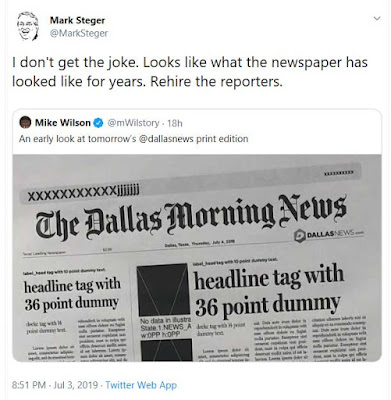 To be fair, I really did get the "joke." It's the filler photo used for the expected stereotypical fireworks shot. You have to view the full front page to see it.

I know, even if President Trump doesn't, that my case isn't a 1st Amendment issue, but still I ask you. Was I over the line? Did I deserve to be blocked? Does it make a difference that I'm a subscriber? Should I join Mike Wilson in the schoolyard and cancel my subscription in a huff? Nyah. I'll just put this out there on the Internet, where it will live forever. Maybe someday he'll mellow and engage me and I'll learn why he was so sensitive. And he might learn why I think laying off reporters hurts him as much as it does me. 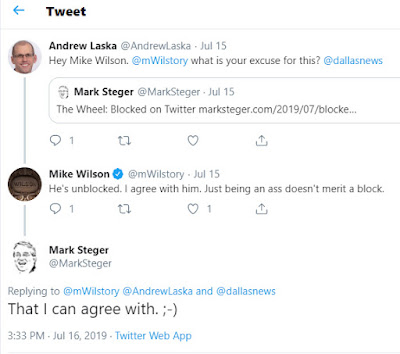