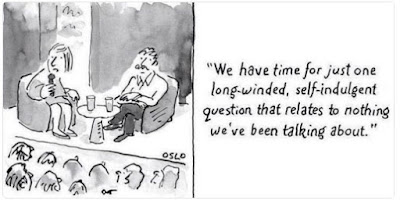 Oslo Davis
Monday evening, the Richardson ISD held the first of four community information meetings about the upcoming bond election. This meeting was at Prestonwood Elementary School. If you missed it, no matter. Three more meetings, at other high school feeder schools, will be held in April. And you can learn everything you need to know about the bond on the district's website.

Here, I don't want to focus on the information about the bond that was shared Monday evening. The district administrators did that and you can find it all on the website. Some misinformation did appear in some of the questions, which does interest me. Much of this seems impervious to education, which probably holds a lesson about the challenges to public schooling in general, but that's a much broader topic than I wish to cover here.

Most of the questions asked at Monday's meeting conformed to the purpose of the meeting, which was for the district to share information about the bond and community members to get their questions answered. But three or maybe four audience members wanted to use the meeting to campaign against the bond. One attendee wanted a forum that offered a "real debate." This put the RISD administrators in a legally awkward position, as state law prohibits the district from promoting the bond. They aren't allowed to debate members of the audience...and so they didn't. Ask them a factual question, they'll answer. Make them defend the bond, you are putting them on slippery legal ground.

Related to the first point, the stated opposition to the bond seemed to me to be misplaced. One man asked how bond money correlated with expected improvements in academic performance. It's a natural enough desire, but difficult if not impossible to answer, especially in a way that would convince a skeptic. And so, to no one's surprise, the RISD didn't say how much STAAR scores will improve because we, say, replace aging air conditioning units at this or that school. The RISD did point out that state law requires using bond money for capital expenses, not operational expenses like hiring more teachers. Bond money provides the classrooms. The things that have a direct impact on academic performance are what happens inside those classrooms. I doubt that explanation did anything to satisfy the skeptics.

A third man, more usefully, wanted to know why the district wasn't spending bond money on science labs instead of multi-purpose activity centers. (Perhaps not coincidentally, he identified himself as a physics teacher in another school district, but hey, we all come at these things from our own perspective.) The answer given was process related. The identified needs were collected from multiple sources — including, presumably, physics teachers — and then prioritized in many meetings, including open community meetings. Whether spending money on science labs came up in that process and how far the suggestion made it wasn't explained, but I inferred that if new science labs were an identified need, they would have made the cut.

There were questions in the meeting about bonds in general, perhaps influenced by misinformation that is common on social media. For example, some say the bond language means the district will be paying for computers with forty year bonds. It was explained that even though that would be legal for the district to do, the district doesn't do it because it doesn't make sense. The district matches the term of the bonds with the life of the asset.

As another example, some say the district never pays off its debt. In fact, the district claims it has one of the most aggressive payback schedules of any district in Texas. My own hypothesis of where this misinformation comes from is that some people saw governments refinance bonds when interest rates were dropping and interpreted that, not as a way of saving money (like refinancing a home mortgage when interest rates drop), but as a way of rolling over old debt with new debt and never paying it off. Some people think the worse of the district even when it's saving them money.

Someone wanted to know how much total interest the district will pay on the bonds. It was explained that it will depend on the timing of construction projects and future interest rates at the time the bonds are issued. The "draw schedule" isn't determined yet. All the district can commit to now is what the tax rate will be. RISD commits to keeping the interest payments within the capacity of that tax rate.

Someone else asked when we can expect construction to complete. The answer, at least for Prestonwood Elementary, was eighteen months, give or take a lot. The task needing the longest lead time is getting city approval, which takes about six months in Richardson and eleven months in Dallas.