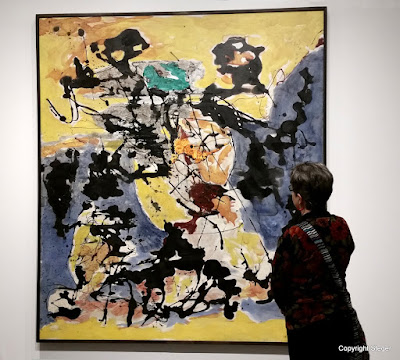 Number 12, 1952
"A tremendously exciting painting." That's what one critic called Jackson Pollock's "Number 12, 1952" when it was first exhibited more than a half century ago. We just had to see it and everything else in the Dallas Museum of Art's exhibit "Blind Spots" before it closed on March 20. The exhibit is claimed to be "the largest survey of Jackson Pollock's black paintings ever assembled." I learned that I prefer his color works. And, if the signs accompanying the exhibit are to be believed, so did the public and the critics. Luckily for us, the exhibit contained plenty of both Pollock's black and color paintings.

Convergence
Perhaps Pollock's most famous work, "Convergence," might be his most popular, too. It's said that when this painting was turned into a jigsaw puzzle in 1965, it was advertised as "the world's most difficult puzzle." It also sold hundreds of thousands of copies. Check your parents' game closet. You might have a Jackson Pollock of your own.

Number 7, 1951
OK, here is just one of Pollock's black paintings. "Number 7, 1951" has been described as "a tour de force of controlled pouring." There are another two paintings in the exhibit that show Pollock's control even more. At first glance it looks like one might be a reproduction of the other. But there are countless subtle differences. How Pollock was able to duplicate such abstract painting is remarkable, but it is proof that what looks like random drips and splats is (sometimes) under very deliberate control.

I'd tell you not to miss this exhibit, but like I said up top, it closed Sunday. Sucks for you.
at 6:00 AM