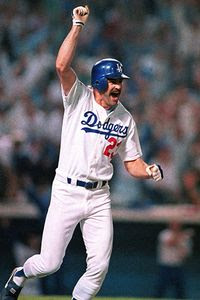 The news came yesterday that baseball great Joe Garagiolo had died at age 90. He had a middling career as a catcher for the St. Louis Cardinals in the 1940s and 1950s and a long career as a baseball broadcaster. My personal memory of Joe Garagiola was his broadcast of Game One of the 1988 World Series between the Oakland A's and the Los Angeles Dodgers. That photo of Kirk Gibson above is the reason I'll always remember that game and Joe Garagiola.

The game plays a central role in an old family story that I've told before. John was just a baby who still needed a bottle in the middle of the night. I knew it was going to be my turn. So, before the World Series game of the night before was completed, I put a blank VHS tape in the VCR (yes, that ancient technology survived into John's own lifetime) and set it record the last few innings before going to bed. I played it back at five in the morning while John and I watched. OK, while I watched and John drained a bottle of baby formula.

That was the setting when he and I were witnesses to Kirk Gibson's historic World Series moment. John may not remember it, and neither may you, but I do...and I'm not going to explain it here. If you're a fan of the game, you already know. If you don't already know, click on the link. It'll make a fan of you.

If you want to watch the whole game, it's on YouTube. Gibson's at bat with two outs in the bottom of the ninth-inning begins at about 2:28:30. The rest is history.

at 6:00 AM
Email ThisBlogThis!Share to TwitterShare to FacebookShare to Pinterest
Labels: Family, Sports