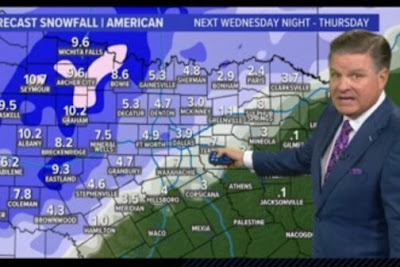 By now, we all know that climate and weather are different. Or we should know. But even those who know still talk about the weather wrong. When we experience a heat wave like our current one, instead of blaming climate change, we instead dismiss the weather as simply a chance event, a quirk, something we have no influence over. As the skeptics have long conditioned us to respond, we just say we've always had heat waves. That Dallas summer of 1980 was a real scorcher, right?

We can't expect people to be alarmed because global temperatures are going up 2 or 3 degrees Celsius. What's 2 or 3 degrees anyway when the temperature swings by 100 degrees Fahrenheit over the course of almost every year? And what's a Celsius anyway?

Since 1980, the number of heat waves—defined by the World Meteorological Association as periods of at least three consecutive days during which temperatures significantly exceed the historical average—has increased by a factor of fifty around the world.
Source: The New Yorker.

I am one who firmly believes that global warming is a fact, who firmly believes that global warming is the Earth's response to humans burning fossil fuels, who firmly believes that global warming is an existential threat to our way of life. But even to me, that single statistic, that heat waves are happening fifty times more today than in 1980, is shocking. It's hard to dismiss. It's something even Pete Delkus could tell us, if he had a mind to stop doubting climate science and just start counting how often we have heat waves. 50x more often. Imagine how retired sports reporter Dale Hansen would have reacted if the Texas Rangers suddenly started going on hot hitting streaks 50x more often than in 1980. It would be a huge story. Baseball would probably change the rules. The weather ought to be a huge story to Pete Delkus, too, even if he can't wrap his head around the idea that climate change is responsible.

P.S. The above image of Pete Delkus and his weather map was captured by D Magazine's Tim Rogers, who insists he did it for readers' amusement only.