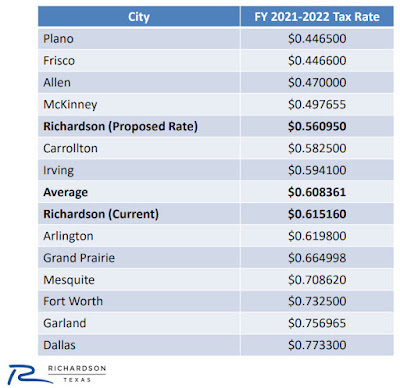 This slide was in the City of Richardson's slide show regarding the 2022-2023 budget. The good news is that the City is proposing to lower the tax rate, to the maximum rate allowed by law without voter approval. The not so good news is that the new rate leaves Richardson with a significantly higher tax rate than Plano, Frisco, Allen, and McKinney have now, some of which haven't even yet set their own 2022-2023 tax rates, so things might get worse for Richardson, relative to these other cities.

Of course, what you pay in property taxes depends on two factors: the tax rate and your home's appraised value. Even with a lower tax rate, your tax bill is, more than likely, going up. But alert homeowners know all this already. Really alert homeowners might also know something else that I just noticed about this table.

If you graph tax rate vs average age of housing stock in each of the cities on that table, I think it would tell an important story. I can't draw that graph because I don't have the data, so everything from here on is speculation. Maybe someone can draw the graph for me or at least suggest where my thinking might be wrong.

The story the graph would tell, I think, is that the cities with more recent growth (Plano, Frisco, Allen, McKinney) have lower tax rates. The older, established cities (Dallas, Garland, Fort Worth, Mesquite, etc.) have higher tax rates. Why should this be? It's not because newer cities are better stewards of taxpayer money (although that might or might not be true). It's because as infrastructure ages, it needs more maintenance, repair, and replacement. That's expensive. If all those sprawling new developments between Richardson and the Oklahoma border want a good look at their own future tax rates, they should look to the cities to their south.

At least, that's the important story I think that table tells. Tell me where I'm wrong. Come property tax time, denser, transit-oriented development is good for your pocketbook.

Thank you for the explanation. I just saw where Plano just set their proposed rate recently at $0.4265.