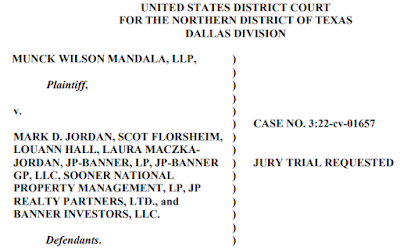 Former Richardson Mayor Laura (Maczka) Jordan was sentenced to six years in prison for bribery and tax fraud. Assuming she reports to prison in October, as ordered, she'll have a new lawsuit to deal with from her prison cell. Law firm Munck Wilson Mandala LLP, is suing Mark Jordan and others, including Laura (Maczka) Jordan, for "an ongoing scheme to defraud or otherwise enrich themselves at the expense of the Plaintiff." The law firm occupied an office building purchased by Jordan. They accuse Jordan of "submitting false invoices, demands, and statements regarding the operation of the firm’s office space in Dallas." Because it's a civil suit, the Jordans aren't facing additional jail time, but if they lose the lawsuit, their pocketbooks could take a big hit. Munck Wilson Mandala LLP seeks more than $1,000,000 in relief.

P.S. One fascinating coincidence in this case is that in 2020, Munck Wilson Mandala LLP hired Mabel Simpson, former Richardson City Council member. There's no indication that Simpson is involved in the lawsuit, but she did work for Munck Wilson Mandala LLP while the Jordans were being investigated and tried by the federal government. The lawsuit claims that the Jordans "used these offices as “war rooms” for meeting and working with their criminal defense attorneys in defending themselves." So it's conceivable that Mabel and Laura might have occasionally been in the same building at the same time. Imagine them running into each other on the elevator. Awkward.

Here is Bloomberg Law's summary of the lawsuit:

Texas-based Munck Wilson Mandala LLP accuse the building owner and property manager of their corporate office of fraud, and seek at least $1 million in compensation, according to a complaint filed in a federal court.

The law firm sued developer Mark Jordan and some of his associates in the US District Court for the Northern District of Texas. They accused Jordan acting with others to defraud them by submitting false invoices, demands, and statements regarding the operation of the firm’s office space in Dallas. He allegedly used his own management company, called Sooner, to defraud tenants by inflating operating expenses built into commercial leases and then using that money to benefit himself and his co-conspirators at the expense of investors and tenants, the law firm said.

The case stems from the 2016 purchase of the Dallas office—Banner Place—by Jordan and business partner Scot Florsheim. Following the purchase, they approached the firm to ask them to become an investor and part-owner of the building to reduce operating expenses and make improvements that would upgrade the office.

After Munck Wilson Mandala agreed to invest, Jordan and his entities managed the operations of Banner Place and controlled operational expenses through Sooner. The law firm alleges that Jordan began to reduce services and began to submit fraudulent year-end reports and invoice additional fictitious excess costs such as the inflation of several categories of expenses that weren’t affected by building capacity.

They also allege that the couple has been convicted twice of white collar crimes in the Eastern District of Texas. “This is not the first tenant the defendants conspired to defraud, but the plaintiffs intends to be the last,” Munck Wilson Mandala said.

The complaint, filed in US District for the Northern District of Texas, can be found in The Wheel's archives.