We all thought 2020 was bad, but it looks like 2021 sucks, too. Friday is the first day in a week that the weather forecast has our north Texas temperatures climbing above freezing. Sunday and Monday nights, the low temperature hovered about zero degrees Fahrenheit. Someone said that in Minnesota, they call that "sweater weather," but in Texas, it's a crisis. Our house escaped damage, but all around us it was like every disaster movie all rolled into one. Start with the background of an ongoing pandemic, and layer on top record-low, sub-zero Fahrenheit temps, icy and snowy roads, power outages lasting for hours or even days for some, frozen and burst pipes, only to flood when the heat comes back on, and warnings to boil water because water treatment plants lost power. Almost everyone we know is facing one or more of these, but we personally have been spared. For many, they still can't go home. The cleanup has only just begun.

Before the disaster was even brought under control, the finger-pointing began. Gov. Greg Abbott, Lt. Gov. Dan Patrick, and national pundits like Tucker Carlson knew exactly where to pin the blame: on windmills. Granted, some of them did freeze up. What they didn't say is that many thermal energy plants shut down as well. Natural gas pipelines froze up. Even one nuclear power generator shut down. All told, the amount of electricity lost from frozen wind turbines was only a small fraction of the electricity lost from the non-renewable energy sources. Also, the critics of Texas windmills didn't say that windmills work fine in Alaska, Canada, Norway, and Antarctica. They winterize them there. Not in Texas.

The facts didn't stop our Republican legislators from introducing legislation to fix the problem. The Texas electical grid is managed by ERCOT (Electric Reliability Council of Texas, with irony on the word "Reliability"). Jeff Leach (R-Plano) blames the fact that some of its commissioners live out of state. He wants legislation to force them to live in Texas. There. Now, when anyone asks, he can say he damn well did something about the problem.

Of course, the real problem was predictable. In 2011, the last time we had a severe winter storm, people pointed to the real source of the problem: utilities didn't "winterize" their equipment. Why not? The state regulators (ERCOT again) didn't require them to. Befause it cost money. It depressed profits. Cold weather rarely happens in Texas anyway. Why waste money on burying gas pipelines or insulating them?

A bill was introduced in the 2015-2016 legislative session that would have required the Public Utility Commission of Texas, the regulatory agency for ERCOT, to develop a strategic plan to analyze "expected changes, including adverse impacts, in the services provided by the agency because of projected changes in weather, water availability, and climate variability, as determined by the Texas state climatologist." That bill was voted down, 47-84, with only 3 Republicans voting in favor. My own representative, Angie Chen Button, voted against the bill, and so did the aforementioned Jeff Leach. No doubt the reason these Republicans voted down the bill was because it included climate change as a factor that needed to be analyzed. Extreme weather events are only becoming more common with global warming. But Texas legislators prefer to keep their heads in the sand. Even if you accept their argument that this year's polar votex was just part of the natural variability of the weather, it still would make sense to winterize the electrical grid. That was obvious after the 2011 storm but promptly forgotten when warm weather returned. It's obvious this year as well, but the initial reaction of GOP politicians in Texas suggests it will be forgotten again. Expect renewable energy to take a verbal whipping. Expect politicians to fret about what winterization will cost, conveniently ignoring the maxim, pay me now or pay me later, double. By some estimates, this will be the most expensive natural disaster in Texas's history. In the end, expect utilities still won't have to winterize, at least not adequately. Deep freezes are already a regular feature of life in Texas. We ought to start preparing for them. 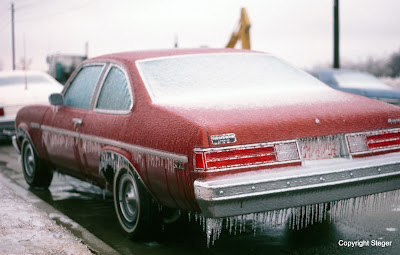 I'm reminded of my first winter in Texas, 1978-1979. Dallas suffered an ice storm worse than any I experienced in my 25 years in Wisconsin. People there know how to drive on snow. People there also know not to try to drive on glare ice, at least not without tire chains. But glare ice is what Dallas suffered in that New Year's Eve ice storm. There were power outages all over because of power lines and tree limbs snapping with ice. It was a couple of days before I ventured out, and even then I needed to pour warm water on my car's door lock to get into my car to start it and get the window defrosters to start to melt the ice on the windows. Even a week later, when I pulled into a gas station, I found the gas tank cover was still iced over (it was hidden behind the license plate on the Buick I owned). I had to drive away without gassing up. This year's storm will rival that one in my memory for worst winter storm ever. And it's not over. For too many, the cleanup this time has only begun.