POTD: Inside the Temple of Ramesses the Great

Today's photo-of-the-day is from the Temple of Ramesses II at Abu Simbel south of Aswan, Egypt. It's a view of inside the temple, which was carved into the cliff on the shores of the Nile River. When rising waters caused by the construction of the Aswan High Dam threatened the temples, the cliff was excavated to allow relocation of the temples. It wasn't just the massive statues outside the temple that were moved. The entire cave-like inside of the temples were dug out and moved, too. It was a feat almost as impressive as the temples themselvs.

Bonus photos after the jump. 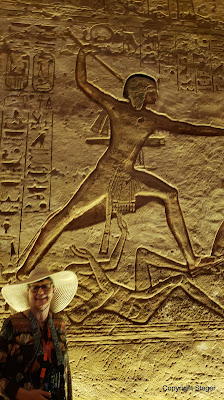 at 6:00 AM
Email ThisBlogThis!Share to TwitterShare to FacebookShare to Pinterest
Labels: Travel