What Not to Say

Last week, I pointed to a statement by Richardson Chamber of Commerce CEO Bill Sproull as an example of what to say in response to all the tragedies experienced by our country in the last days and months. He used plain language. He was direct. He named the problem. Today, I want to highlight a statement by someone else that exemplifies the things not to say.


The statement in question is a Facebook post by Mabel Simpson, a former Richardson City Council member. You remember Mabel Simpson, who once appeared on the cover of Time magazine brandishing a gun. The last time The Wheel looked at Simpson, it was her valedictory address as a council member. In it, she pointed out "how the new keyboard warriors can erode public trust." Mabel Simpson, know thyself. 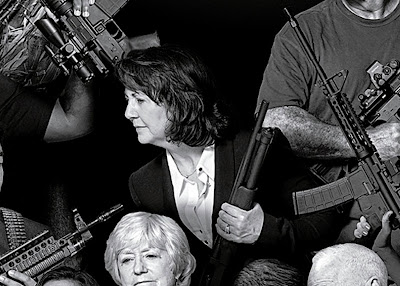 Taking down statutes, monuments, desecrating historical sites and monuments is an insult to we "The People"! Prosecute the people breaking the law destroying our historical monuments and have the overreaching County Commissioners actions over-turned. Govenor Abbott... step up and lead this State, you were supposed to be the answer for common sense and conservative values, what a disapppontment!

Try to locate COMMON SENSE as your guide post...as this is crazy!
Business owners and citizens have grown tired of your inaction and call for decisive leadership, not what you have been exhibiting.

What's wrong with it? Let me count the ways. It calls the Dallas County Commissioners Court "a joke." Now, Mabel Simpson is no longer a City Council member. She's a private citizen entitled to rant as much as you or I am (especially the "I" — take this post for example), but an ad hominem attack isn't an argument. It's a schoolyard taunt.

She goes on to describe a regulation requiring people in stores and restaurants to wear face masks as "ridiculous" and says "Texas will not stand for it!" as if she speaks for everyone. Texans have lived with the rule "No Shoes, No Shirt, No Service" all our lives without, as far as I know, considering this public health measure "ridiculous." Why the reasonable extension "No Mask, No Service" suddenly tips the rule into tyranny is beyond me. It's easier to get sick from someone sneezing or coughing near you than it is from their bare feet. What's "ridiculous" with trying to prevent getting sick from either?

Then Simpson is off on a hard right tangent with the weirdest line of her rant. "Taking down statutes [sic], monuments, desecrating historical sites and monuments is an insult to we 'The People'!" I'm one of the "people" too, and personally, I think it's the other way around. Statues to Confederate generals are an insult to "We the People", the opening words of the United States Constitution, the document those Confederate generals went to war to destroy. But unlike Simpson, I know I don't speak for everyone. Two wrongs may not make a right, but those statues are definitely a century-old wrong, made worse by the date. For Simpson to give her defense of statues to the Confederacy on Juneteenth is an obscene insult itself.

She calls for Governor Abbott to "Prosecute the people breaking the law destroying our historical monuments" but says nothing about George Floyd or prosecuting his murderer. Racism in law enforcement and our legal system is not even on Simpson's radar.

She concludes by saying, "Try to locate COMMON SENSE as your guide post...as this is crazy!" Well, crazy is as crazy does. With respect for Simpson's service to Richardson, her showing more concern for the fate of statues to Confederate generals than for the health of living Americans is not my idea of common sense.

What did Simpson say that was wrong? It would be harder to find anything she said that was right.


In the interest of full disclosure, I admit to endorsing Mabel Simpson in her last election campaign for City Council. It was the second worst electoral decision of my blogging career, behind only my endorsement of Laura Maczka for mayor in 2013. I'll never be able to quit apologizing for that.

Mabel Simpson strongly implies that business owners are as opposed to requiring customers to wear face masks as she is. I saw this DMN article too late to reference it in my own, but it casts doubt on who is with Simpson on this: "Masks are back in Dallas County — and retailers lobbied for it."