Say His Name. Which One? 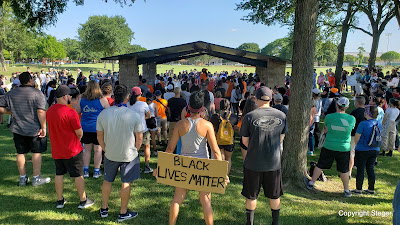 I haven't protested since Nixon and the Vietnam War. That was fifty years ago this fall. Trump's war on protesters was the thing to finally get me up off my couch and back into the streets. I attended Wednesday's rally and march for justice for George Floyd at Berkner Park in Richardson organized by Berkner High School students. I was with about 500 others. Most attendees looked to be students or recent graduates. There were a number of young parents from the neighborhood with toddlers in strollers or wagons. And then there were three or four geezers like me. Reporters from Community Impact newspaper were there. I saw a van from CBS 11 but didn't see if they were taking video.

At the rally, I learned I was mistaken. I thought it was Trump who got me to the rally. But once there I realized I was really there to pay respect to George Floyd and the other victims of systemic racism. It was the young leaders of the rally who showed me that. There were several speakers, all well spoken and focused on remembering the victims. No one mentioned Trump's name. No one said anything to elicit boos.

There was a long recitation of the names of victims, sadly all from just the last few years. There was a call-and-response:

There was a moment of silence. Actually, eight minutes and 46 seconds of silence, the duration that a police officer held George Floyd down on the ground with his knee on his neck. During our own moment of silence we were on bended knee. That was uncomfortable for this old man. My legs ached. My back ached. My bent toes ached. The thought of why I was kneeling hurt more. But I wasn't going to shift my weight. George Floyd couldn't.

Afterwards, the crowd marched around the edge of the park. The line was long enough that the front of the line had wrapped around the distant corner of the park before the end of line had barely begun to march. It was inspiring.

I didn't speak at the rally, but if I had I would have wanted these young people to know that, as Martin Luther King, Jr, said, "the arc of the moral universe is long but it bends toward justice." I was in high school when MLK was murdered. I remember the shock and pain. Yet because of his efforts and so many others, schools today are no longer the all-white and all-black classrooms and halls that they were in my day. The education system is not perfect today, the work is not done, but it's better than in my day. I would want the young people to know that achieving equal justice under the law doesn't come easy either, it's not guaranteed, but their efforts at Berkner Park give me hope for the future. Watching and listening to them, I entertained the thought that if the 500 young people at that rally were to replace the 500 people in Congress today, our country would be in a better place tomorrow. That made me very glad I had come. 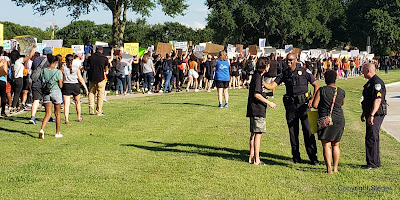