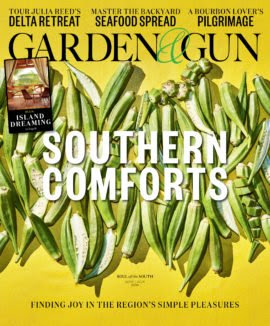 When my family was young, we used to play a game when we were driving on cross-country car trips. The game was called "McDonald's or Burger King?" I wasn't asking where we should stop to eat. Instead, I'd point out a store name and we'd discuss how good of a name it was for a business. For example, which name is better for selling burgers? Burger King is a great name for that. Which name is better if a burger place wanted to expand into, say, selling sausage biscuits for breakfast? The name Burger King was a handicap for that. McDonald's was the unanimous choice for almost any kind of business expansion we could imagine. Pizza Hut, Taco Bell, etc., were all so limiting. But McDonald's is a nondescript name that could work with any business the company might want to get into, anywhere in the world. It doesn't even have to be fast food.

I thought of that game when I saw this magazine cover. "Garden & Gun." It sounds like the smallest overlap of Venn Diagram circles that you can imagine. Surely it's the losing answer to every game of "McDonald's or Burger King?" It's a terrible name or just maybe the name is genius. The option to choose when you're in the supermarket checkout aisle and you have to pick one magazine to please the whole family on a long cross-country car trip. Now you don't have to choose between "Better Homes and Gardens" and "Guns and Ammo". You have a single magazine to catch the interest of double the market. Genius. Or not. There wasn't always just one right answer to "McDonald's or Burger King?" There were a lot of angles to attack the question. It exercised critical thinking skills. It was the family discussion that it led to that mattered. That's what made it a great game.

I sure do miss playing those games on cross-country car rides.