COVID-19 Response: Who's in Charge? 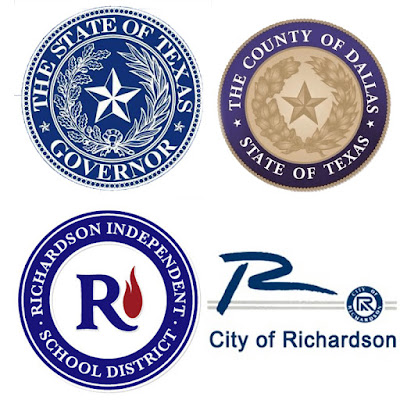 The Texas state government has been a laggard behind other states and behind local governments in Texas. After weeks of pleas, on March 31 Gov. Greg Abbott issued a statewide order closing non-essential businesses. He carved out an exception for religious services. This exception appears to apply "if religious services cannot be conducted from home or through remote services." Is that a dangerous loophole?

While the state was dragging its feet, local governments were taking the lead in Texas. I haven't gone back to make sure I remember all of the dates right, but I'll credit Dallas County, the City of Richardson, and the Richardson ISD for all closing non-essential activities at about the same time, all well ahead of the governor.

These overlapping local governments seem to be leapfrogging each other on how long the closures will last. RISD was first to say schools were closed indefinitely. Dallas County closed non-essential businesses first until April 3, then until April 30, then until May 20, lastly back to April 30. The City of Richardson gets credit for closing businesses until April 30 back when Dallas County was still saying April 3. There has been some inconsistency in how long the orders will last, but how about in what they cover?

Richardson ISD seems to be more aggressive in what it covers. Schools are closed. All indoor facilities are closed. Outdoor facilities including playgrounds are closed. Kudos to RISD for taking this pandemic the most seriously. I guess when you are responsible for children all day, every day, taking their safety seriously is deeply ingrained.

The City of Richardson seems to have hitched its wagon to Dallas County. Except for the shifting dates already mentioned, I know of no differences between the City of Richardson's order and Dallas County's. Consistency is important to avoid confusion, although not as important as residents' safety. On that front, there are still public doubts about some activities allowed by both city and county.

I hope, but don't know, that regular conference calls among the county and its various cities (and school districts for that matter) are being held to review inconsistencies in orders. Maybe there are philosophical differences that can't be bridged, but I'd hate if the inconsistencies are simply due to giving priority to aligning with neighbors' orders over residents' health and safety. The history of patchwork implementation of governmental restrictions in response to this pandemic does not inspire confidence that we can control this pandemic.

This article was first published on "Richardson Living."

I was not a trump supporter in the previous election, but I for one will say he has gotten this 100% right. Or as right as possible. I will support him this time around.

As a lifetime dallassite, and risd supporter, and 5th generation texan, we have passionately protected our right to local rule. (Why else would a school board even exist?)

The republican party has always been a states rights party. In Texas, we always want the state to butt out of our local business.

You can't have it both ways. Abbott has done the right thing.

Trump was 100% about China. I learned a lot. When he was called racist for shutting the borders, he was again 100% right.

He was right about WHO.

Heck, it even appears he might have been right about the anti malaria drug.

Before you throw everyone under the bus, consider three things.

1) would viden have taken such actions?

Be careful what you wish for. I, for one, do not wish for big government in my life and I refuse to take a knee to it.

I just can't imagine during WWII that all this arm chair generaling and 20 20 hindsight would exist.

Let's support our government and pull together. This blame game is childish and divisive.