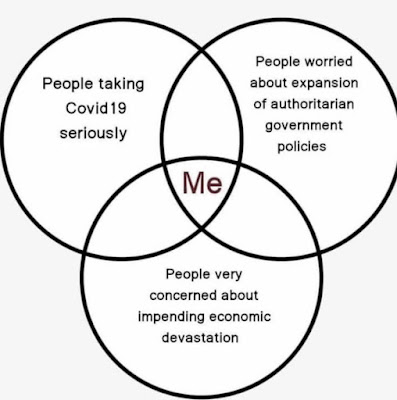 This Venn diagram illustrates the challenge we face reopening the country during the COVID-19 epidemic. Many of us are in the middle of this Venn diagram. We support the stay-at-home and social distancing orders because we are in the upper left circle of the Venn diagram: "People taking COVID-19 seriously." We supported the $2 trillion relief package passed by Congress because we are also in the bottom circle: "People concerned with economic devastation." And we supported strong oversight in the distribution of that relief because we are also in the upper right circle, which I'll paraphrase as: "People worried about government accountability." In balance, we are in the bulls-eye of the Venn diagram.

But the people who are nearer the outside edges of the circles are getting restless. The cries that the cure is worse than the disease are growing louder from those firmly in the bottom circle. People on Facebook wring their hands and say, "People die every day. Life has to go on." (Maybe they aren't even wringing their hands. It's hard to tell sometimes.) Such people are being joined by people who fit snugly in the upper right circle, those who distrust government, which is most of us, although some go farther than others. "You shut down people's businesses and lives and civil war is the next step."

How do we return to normal in an environment like we're in?

The first thing we should understand is that eliminating the lockdowns won't fix the economy as long as COVID-19 is still a threat. Listen to experts, in this case, not the health experts, but the economic experts. According to Vox, "The University of Chicago's Booth School routinely polls a panel of distinguished economists for their views on policy issues, and found near-universal assent to the notion that prematurely ending lockdown measures would ultimately be more economically costly than allowing them to proceed."

In other words, as painful as the "cure" has been to our economy, it's still better than the pain that the disease itself can cause the economy.

We have to find a strategy for returning to normal that balances all three circles in that Venn diagram. Vox describes the technological, political, and social challenges we face trying to do that. Those that most fear the disease will resist reopening too soon, lest that lead to a resurgence of disease. Those who most distrust government will resist testing and contact tracing (i.e., surveillance) on a scale wide enough to prevent new outbreaks from getting out of control. Those impacted directly by business closures and unemployment will resist state or local governments reinstating lockdowns when ICUs begin to fill up again. It's a vicious circle.

The worst that can happen would be if society fragments and centrifugal forces spin us away from the center of that Venn diagram towards the edges. We need strong leadership to keep us together in this struggle, balancing the competing demands of those three circles. We also need social cohesion strong enough to remain in that Venn diagram bulls-eye. Our society is about to be tested like seldom before.


Update: I originally credited the Venn diagram to Lake Highland's Lynn Davenport, from a Facebook post on April 11. I've since seen the same Venn diagram on an April 10th Facebook post of the Libertarian Party of Kentucky, so now my hypothesis is that Lynn Davenport used the diagram without giving credit. Kind of a Libertarian thing to do, in my mind.