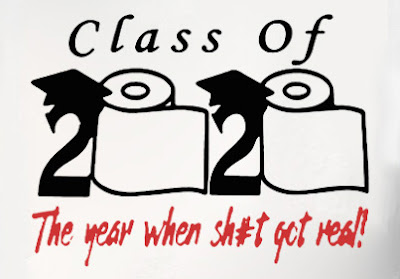 It's only early April, but it seems like 2020 has already been the longest year of our lives. America has experienced other bad years: 1952 (57,628 victims paralyzed by polio in that disease's peak year); 1968 (16,889 US deaths in the Vietnam War's peak year); 2001 (2,996 deaths on one day alone, 9/11). Queen Elizabeth II had a term for such years. She anointed 1992 her family's personal annus horribilis: divorce or separation of three of her children and a disastrous fire at her royal residence Windsor Castle. For children today, too young to remember any of those other tragic years, they now have their own. 2020 is on track to be worse than any other. How quickly COVID-19 turned this year from one of innocence and joy to an annus horribilis when sh#t got real.


Let's look back at the turn this year has taken for the children of Richardson ISD. In January, in recognition of impressive academic improvement over the past two years at RISD's Bukhair Elementary School, all 100 students in second grade were surprised with brand new bicycles, donated by "Buddy's Helpers" of the PepsiCo Foundation, a nonprofit engaging high school student athletes in an annual community service campaign. Good times.

Also in early January, high schools were rehearsing their annual musicals: "The Wiz" at BHS, "Crazy for You" at LHHS, "Hairspray" at PHS, and "Urinetown: The Musical" at RHS. In late January, students sang and danced and put on terrific shows for friends, family, and the community who packed the auditoriums, little realizing how soon such behavior would come to be life-threatening. It seemed that the biggest issue facing any of us in January was pay toilets (the trigger for the satirical plot of Urinetown).

Off stage, the real issue RISD was fighting was youth vaping. Inhaling nicotine mixed with flavoring and, sometimes, illicit substances, can have negative health effects. Vaping was and still is dangerous, but everyone's attention was about to be diverted by a life-threatening respiratory disease. COVID-19 makes breathing difficult or impossible for thousands of victims.

A potentially contentious issue was just starting to arise as RISD announced a study of possibly moving sixth grade to junior high campuses and adopting a middle school model in the district. Going forward with that study during a pandemic will be challenging. One factor driving the study is the realization that several RISD schools are projected to reach capacity in the next few years, according to a demographer’s report. Putting even more strain on overcrowded schools will be a new Texas law mandating that full-day Pre-K be made available to all qualifying families. Maybe COVID-19 will inspire the RISD community to work through traditional issues with a new attitude: Don't sweat the small stuff, and it's all small stuff.

But let's not get ahead of ourselves. RISD still had things to celebrate in February. RISD students swept the top three awards at the engineering and design competition at the 11th annual African American Male Academic Bowl at The University of Texas at Dallas. The Lake Highlands High School Mock Trial team, competing against 32 teams in Region 10, advanced to state competition, where they placed 7th in the State of Texas. The Richardson Eagles boys basketball team was district co-champions after beating the state's top-ranked team from Duncanville in overtime, then advanced to the state regional semifinals. Dozens of student-athletes signed letters of intent to continue their academic and athletic careers in college.

Also in February, the district hosted open houses at the newly completed Multipurpose Activity Centers at its four high schools. Before students in athletics and fine arts could barely begin to take advantage of these great facilities, COVID-19 would force their closure, along with all 54 schools throughout the district.

On February 27, RISD informed parents that it was aware of the threat of COVID-19 and was preparing to implement and follow protocols and guidelines as directed by health authorities if necessary.

The pandemic did come as feared and turned the world upside down. RISD students left for Spring Break on March 13, not knowing when they'd come back. Texas Gov. Greg Abbott might have initially set a mandate that schools in the state close only until April 3, but RISD began preparing for the long term. RISD announced that schools would be closed indefinitely. Administrators and teachers had just one week during Spring Break to prepare for continuing school in an online format. Schools issued devices for grades three through eight so students could access lessons from home. Teachers scrambled to revise lesson plans to allow for remote teaching. By the end of the first week back after Spring Break, RISD’s at-home learning website was live, offering lessons and activities that students can use to continue learning from home, as well as parent resources to support at-home learning, mental health and well-being.

RISD also quickly adapted other important services like feeding students, all of whom are used to getting daily meals at schools. The RISD arranged for drive-up, take-away meals available to families in need. During the first week after Spring Break, RISD distributed 62,079 breakfasts and lunches. Partnering with the Network of Community Ministries, Cafe Momentum, and others, thousands of weekend meal boxes were also provided.

Behind the scenes, administrators are working to adapt other details of schooling like testing, grading, class ranking, counseling, and complying with ever changing state, county, and city orders about everything from standardized testing to food distribution to social distancing.

When COVID-19 is finally conquered, and it most assuredly will be, the world will owe an immeasurable debt to doctors, nurses, and health care workers who put their own lives in danger to save others. But standing right behind them will be our teachers, administrators, and school support staff. They are heroes, too. No matter the obstacles, they tirelessly work to fulfill RISD's mission of being the place where all students connect, learn, grow and succeed.

This article was first published on "Richardson Living."
at 6:00 AM