Like Pumpkin Spice Latte at Starbucks, it's that time of year again. You know, political yard sign stealing season. It happens to both sides. Neither side gains anything by it. A woman on Nextdoor complained that her Ted Cruz sign was stolen and someone else responded, I assume tongue-in-cheek: "Imagine how many people may not vote for him now that your sign is missing."

It's as predictable as falling leaves and as futile to stop. All that really happens is that victims become even more partisan. So I'm not going to tell you it's not helpful to your candidate (IT'S NOT HELPFUL) or tell you not to do it (DON'T DO IT!). I'm just going to repeat an evergreen story (a true one — the kind that makes for the best old stories) that shows how cheaters never prosper (just kidding — "The good guys always win" is a movie trope that doesn't apply in real life).

Our real-life story is from a police report from 2002. I'll let the reporting officer (R/O) tell the story.


R/O was driving down Northwest Highway at Skillman looking for an accident scene. R/O observed listed truck pulled over on the Skillman service road and suspect out of the truck pulling-up election signs. R/O thought this appeared odd so turned around and stopped listed vehicle at Skillman at Northwest Highway. Susp1 was the driver and Susp2 was the passenger. Both susps were asked for identification. R/O looked in the bed of the truck and there were approximately 10 political signs with the name "Pauline Dixon" on them. Susp1 was asked if Pauline Dixon was aware that he was pulling up her signs and Susp1 replied, "No". Susp1 was then asked if she was who he was running against and Susp1 stated, "Yes." Both Susps were released at the scene and the signs remained in the bed of the truck. Sgt Beck 3688 was notified.

Source: My Daily Dose via Archive.org.

In case you haven't put two-and-two together, "Susp1" is none other than Congressman Pete Sessions, who has represented Richardson in District 32 since that 2002 election in which he defeated the sign-less Pauline Dixon. That's right. Pete Sessions is a sign stealer. And today an honored member of the GOP leadership in Congress from a perennially safe GOP district in North Texas. Coincidence? You decide.

A copy of the police report in question is below: 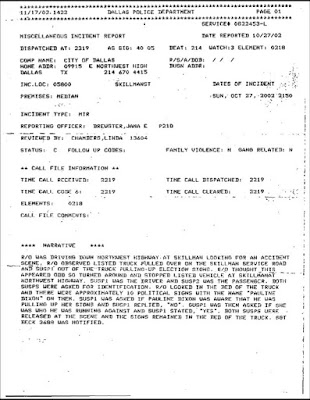 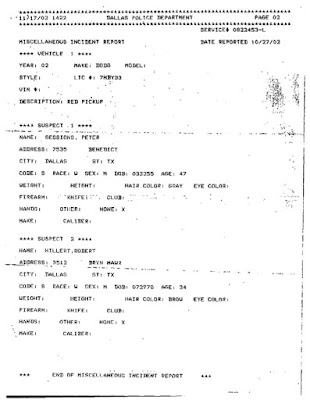 hi Mark, maybe you can shine some light on this urban legend.

the legend goes where Pete Sessions was living in Canyon Creek, evidently got a mistress, moved to Florida with her and keeps an apartment in Richardson so he can still hold office.

I can't remember where I heard that, but if that's true, is he even legal to represent this area?

again, might be urban legend. 90% of what i hear these days is untrue. but then again maybe 50% of what i say is as well. lol

The gist of the story is basically correct. Pete Sessions is on his second marriage, to a longtime Florida resident who at least until recently has maintained a home in Florida. Pete has maintained a home in North Texas (Uptown, I believe, not Richardson). When not in Washington, DC, the couple commute to both states. As for legality, it's not an issue. There's no Constitutional requirement that a member of Congress live in his or her district. It used to be that voters cared about things like that, but anymore it's only the R or D after their names that voters look at.

In a Facebook comment, someone said, "I wonder what the rest of the story is as there’s ALWAYS 2 sides."

1. Yes, there are always two sides. I can't find a source, but my memory tells me that Pete Sessions's defense was that the signs were illegally placed in the public right-of-way and so he was doing the city a service by removing them. He didn't explain why he was doing it under cover of darkness or why he presumably stopped the practice after getting caught, but hey, it's another side to the story.

2. I seriously hope that when this commenter reads accounts of police shootings of unarmed men that they don't reflexively accept the police account but instead ask for the other side of the story, just like they did here when Pete Sessions was stopped by the police.

On November 6, 2018, Pete Sessions was defeated for re-election by Colin Allred. I guess Pete Sessions's days of stealing opponents' campaign signs is now definitely behind him.

On November 3, 2020, Pete Sessions is favored to regain a seat in Congress, this time from a district 100 miles south, in Waco. No word on whether he is being helped this time by sign-stealing.