The story is from The New York Times. It's about Seattle...and Memphis and Minneapolis. But it could be about Dallas...and Richardson.


SEATTLE — The part of this city east of Northgate Mall looks like many of the neighborhoods that surround it, with its modest midcentury homes beneath dogwood and Douglas fir trees.

Whatever distinguishes this place is invisible from the street. But it appears that poor children who grow up here — to a greater degree than children living even a mile away — have good odds of escaping poverty over the course of their lives.

Believing this, officials in the Seattle Housing Authority are offering some families with housing vouchers extra rent money and help to find a home here.

After the jump, a look at Richardson.

Now, back to Richardson. Here's the map from Opportunity Atlas for Richardson. The city is outlined in the upper left. I cropped it to include areas south of the city, most of which are in the Richardson school district, to make a point. Note well that the map doesn't show the concentration of poor children today. It shows what's happened to poor children who lived in neighborhoods 30 years ago. Blue indicates they've grown up to escape poverty, no matter where they may live today. Blue indicates opportunity zones. Red indicates they haven't. Red indicates poverty traps. 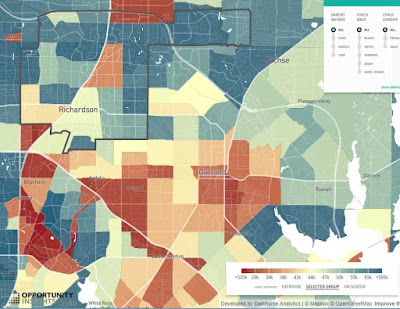 The City of Richardson as a whole looks like an opportunity zone. Poor children growing up in many parts of Richardson often escape poverty. It's not perfect. It's not uniform. But outcomes here are better than in neighborhoods to our south in Dallas, or to our north in old Plano, or to our east in old Garland.

That brings me to my wish list. If there were two things I would change about the City of Richardson's land use practices, they would be this:


Now you know what I want for Christmas. So much better than another sweater.
at 6:00 AM
Email ThisBlogThis!Share to TwitterShare to FacebookShare to Pinterest
Labels: LocalPolitics