Former Richardson ISD school board trustee David Tyson, Jr., has sued the RISD, alleging its at-large election system is a violation of the Voting Rights Act of 1965. He wants RISD to change to single-member-districts, in an effort to elect more minorities to the school board. The success or failure of this approach depends largely on the distribution of minorities in RISD as a whole.

Steve Benson has drawn four new maps that help visualize the distribution of racial populations in the Richardson ISD. 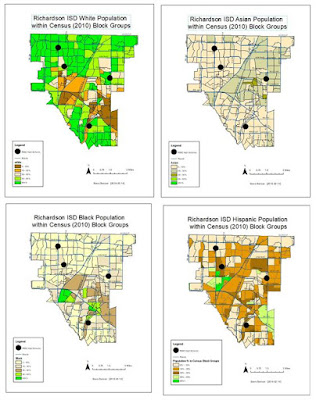 Note that the census blocks used in these maps do not have equal population, so it's possible that the resulting maps could be misleading. For example, the five census blocks centered at Miller Rd and Plano Rd are shown as being 50-65% Hispanic. But this area consists mainly of warehouses and other industry, with few voters actually living in these census blocks. Census blocks don't exactly align with voting precincts, but in the 2017 RISD trustee election, there were only 20 votes total in the voting precinct that most closely matches those census blocks.

But...given that big caveat and recognizing that more research is needed, I still look at the maps and see the potential possibility of drawing an African-American district centered on Hamilton Park, an Hispanic district centered on Spring Valley Rd at Central Expressway, three white districts across the northern border of RISD, a white district in Lake Highlands, and a diverse district with what's left in the center. That's seven districts, of which two have a chance of being minority-majority. Even if the minority doesn't achieve an absolute majority in these districts, its increased concentration ought to significantly improve its ability to elect one of its own.

In the interest of achieving diversity on the school board, I support the attempt to draw single-member-districts along these lines. I foresee the downsides of doing this ("turf wars" and even potential resegegration — Yikes!), but I believe the interest of voting rights Trumps the risk of bad results (pun intended).