Former Richardson ISD school board trustee David Tyson, Jr., has sued the RISD, alleging its at-large election system is a violation of the Voting Rights Act of 1965. There are two ways this lawsuit could play out. One, the RISD could engage in a long and expensive fight in court and win, leaving the status quo in place. Or two, the RISD could lose the lawsuit and have to adopt a court-imposed solution. (There's a third outcome, a negotiated out-of-court agreement, but that is more or less equivalent to outcome two, losing the lawsuit.) There's no betting line on this, but if there were, I suspect outcome two would be the betting favorite.


What might a court-imposed solution or a negotiated out-of-court settlement look like? David Tyson, Jr., himself has expressed his interest in single member districts. But is the RISD electorate distributed in such a way that single member districts would elect more minorities to the board of trustees than the current at-large system does? That's the million dollar question. It makes little sense to impose a bitter, messy "solution" only to have the same all white results.

Steve Benson did some homework that offers some tantalizing clues to answering that question. He mapped the Hispanic population in the RISD (the largest minority group). 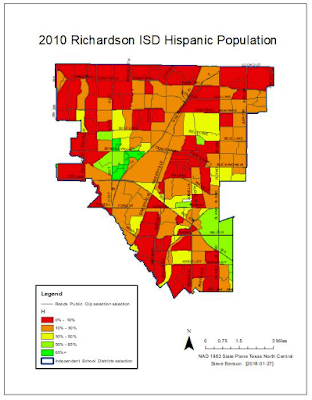 The green areas have the highest percentage of Hispanics. The red areas the least. Say the RISD drew seven single-member districts. Is it possible to see in that map a compact, contiguous district that would have a majority Hispanic population? One that might be expected to reliably elect an Hispanic trustee? Squint your eyes and draw a district extending from Spring Valley Rd in the northwest and southeast down along IH 635. This map highlights Hispanic population. Another map showing RISD's African-American population would probably highlight other areas along the same axis (e.g., Hamilton Park). Combined, the two sub-populations maybe could yield the desired minority-majority district that might be expected to reliably elect a minority trustee. Or maybe not. (Steve Benson himself looks at that map and concludes it would be difficult to draw RISD single member districts that would lead to the wished for board diversity.) More homework is needed to answer that question, but this is an excellent start.

Would this be enough to satisfy David Tyson, Jr., or the court? If not, there's another solution might be a win-win for both parties to this lawsuit. Cumulative voting "is a multiple-winner voting method intended to promote more proportional representation than winner-take-all elections...As of March 2012, more than fifty communities in the United States use cumulative voting, all resulting from cases brought under the National Voting Rights Act of 1965...Courts sometimes mandate its use as a remedy in lawsuits brought under the Voting Rights Act in the United States."

What are the advantages of cumulative voting over single member districts? For minorities, voters can concentrate their votes to increase their chances of electing a candidate from their minority group, no matter how scattered they may be geographically. For the school district, trustees are still elected by the district as a whole, so the risks are lessened that single-member-district "turf wars" among the trustees will divide the district. (Cumulative voting can be used not just by racial/ethnic groups to concentrate their votes, but also by neighborhoods, so "turf wars" are still possible, but perhaps cumulative voting might be seen as a relief valve for that situation. Another plus.)

Cumulative voting isn't getting enough discussion for me to consider it the favorite in RISD's current situation, but it just might be the compromise that carries the day. We'll see.

I'm still partial to cumulative voting, but there are some advantages of single-member-districts over cumulative voting.
It's more familiar.
It reduces the cost of running for election.
It depends less on getting the minority bloc to turn out to vote (e.g., if a district is 100% minority, a minority candidate is guaranteed to win).